What does "The Best of Both Worlds" refer to?

Two of the most famous episodes of The Next Generation are "The Best of Both Worlds" Parts 1 and 2, in which Picard is assimilated by the Borg and Riker and the remaining crew are faced with the prospect of having to sacrifice him in order to halt the Borg advance. 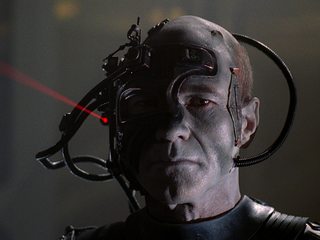 What exactly does the title of the episodes refer to? Why was it chosen?

There are various theories out there, but I am looking for a statement by an official source.

In the episode, the Borg turn Picard into not another nameless, feature-less drone, but as a link between the Borg and humanity. The Borg's view of humanity is that they are a resillient bunch that can be better controlled and domineered with one of their esteemed captains at the front of the Borg Horde. In effect, the Borg are adapting to the forthcoming battle with the Federation.

PICARD: We would rather die.

BORG: Death is irrelevant. Your archaic cultures are authority driven. To facilitate our introduction into your societies, it has been decided that a human voice will speak for us in all communications. You have been chosen to be that voice.

In effect, Picard is made to combine the machinery of the Borg while retaining his own individuality; the Best of Both Worlds.

The Doc's answer seems plausible (assuming they came up with the title before dropping the Data/Picard idea, which hasn't been verified), but even if that was the original reason, that leaves the question of why they didn't bother to change the title once they dropped the notion of combining Picard and Data. Maybe it could be justified as an ironic reference to Riker's arc in the episode, where he is conflicted between wanting to become a Captain and wanting to stay on the Enterprise, and ends up getting "the best of both worlds" in a "be careful what you wish for" kind of way.

Note if the title was originally based on the Data/Picard idea, "The Best of Both Worlds" presumably would already have been intended as a somewhat ironic title, since destroying Picard and Data's individuality and combining them into a single being would not have been seen as a good thing by the writers or viewers. And since steenbergh's interpretation about Locutus being both being a quasi-individual and also a member of the collective would also make the title "The Best of Both Worlds" an ironic one, it's quite possible that the writers intended it to allude ironically both to Locutus and to the resolution of Riker's dilemma simultaneously.

In support of the idea that the title does refer at least partly to Riker, I found this interview which had the following comments by Ronald D. Moore, who was on the writing staff at the time, and who says that Michael Piller was the main creative force in the writing of the episode, and that he had a "very personal connection" to Riker's arc:

The story really goes to Michael Piller, who was running the writing staff in the third season when I joined the show. In the writers room, we would often talk about revisiting the Borg. Piller said as the season went on that he thought there should be a cliffhanger, which Star Trek had never done. ... It was the only show that year that we didn't actually sit in the room as a writing staff and break together. Michael said he wanted to go do it. Michael had a very personal connection to that particular story. The episode starts with Riker getting an offer to go command another ship. That's at the heart of it. Michael said very overtly that he was in a very similar place. He was the number two guy on the show, and he was debating whether or not to leave Star Trek and go and run his own show or if he wanted to remain second in command of the Enterprise, as it were. So he was Riker, and he wrote the story from that perspective.

It's also noted by Moore later in the interview that neither Piller nor anyone else really had any idea what would happen in part 2 when they wrote part 1, so keep that in mind when thinking about interpretations of the title.

Not official, but perhaps this will enlighten us somewhat. Memory Alpha tells us that:

In an early draft of the story, however, Data and Picard were combined as one Borg unit. Piller recalled, "Someone said why should they do this, and we didn't have a good answer so we dropped that idea." (Captains' Logs: The Unauthorized Complete Trek Voyages)

I am unsure whether the title had been established by then, but it would make sense to call an episode where a human and an android meld into one life form as 'The Best of Both Worlds'.

Reading through the comments Michael Piller (writer of both parts of "The Best of Both Worlds") it seems likely the title is meant to refer to three separate items: two in-universe, and one out-of-universe.

The humanity of Picard with the technology of the Borg

Riker getting promoted and remaining on the Enterprise

This possible reason is mentioned in Hypnosifi's answer, but here is some additional backing for the speculation. The question is raised multiple times: why has Riker not left the enterprise to take command of his own ship? With Picard assimilated, Riker assumes command and stays aboard the Enterprise: the best of both worlds. Michael Piller states in Starlog issue #159, p. 42, (quoted in the memory alpha article on the episode here)

We had no idea it was really a Riker story when we started out. I came up with the idea of having the Shelby character come on board to challenge Riker. That seemed to play into the Riker emotions and the conflict over whether to take the other job or not, and that builds into the issue of whether or not he was big enough to fill the center chair.

This suggests the character of Riker was at the heart of the episode, at least in the mind of the writer.

One possible additional inspiration from the title comes from the mental state of Michael Piller at the time he was writing the episode,

Piller had intended this season finale to be his last contribution to The Next Generation, after having agreed to only a one-year contract. His turmoil over leaving the show was reflected in Riker's struggle over leaving the Enterprise for his own command. Piller recounted, "By the end of the season, I was struggling with whether or not to stay or leave... Due to having always found it easier to write character exposition than technobabble, writing about Riker's career dilemma came easily to Piller, especially since the character's issue mirrored his own situation. He remembered, "As I was writing this script, I found myself in the position of Riker, who was trying to decide whether he wanted to leave the ship or not. Much of what happened in Part One was about what was going on in my head."

Perhaps Michael Piller was also making some sort of meta-commentary on the episode itself. It was a character driven story that also featured technobabble and a compelling story arc of the Borg and large scale space battles: the best of both worlds.

Yet another theory, distinct but similar to @Hypnosifl's answer, is that the title is focusing on Riker. Much of this Memory Alpha page notes that Riker was the focus of this episode; he is facing quite a dilemma.

Note, however, that at the beginning of the episode, he declines taking command of the USS Melbourne. He has shown time and again that he is dedicated to furthering his career, but he is also very comfortable in his position on the Enterprise-D and doesn't want to let go of his 'family' there.

I don't have any information to support definitively that this is what the producers were thinking, other than the fact that we do know that this was a Riker-centric episode (Source)

Another theory I have developed is the development of the Borg we see in these episode. The Memory Alpha page notes that:

While the Borg had proven popular after their introduction in the second season episode "Q Who", the writers had struggled to bring them back, noting the problem of writing for a race with no personality. (Captains' Logs: The Unauthorized Complete Trek Voyages)

These episodes show significant development of the Borg, notably by providing them with a bit of a personality. In this episode, we learn much about the Borg and their collective personality, notably that they are arrogant (these episodes introduce the catch-phrase 'Resistance is Futile') and that their goal is assimilation. So, from a production perspective, the title may have been chosen because it does provide the best of both worlds; it provides an excellent couple of episodes for viewers, but also aids the writing staff!

23
Was Seven (of Nine) really 24 years old?
41
In the Battle of Wolf 359, one ship survives. Which one was it and why did it survive?
14
Is Sisko referring to the events of First Contact here and if so how does it affect things?
6
Strange orders and plot-points in TNG: "Descent"
18
Why did the producers of Star Trek: TNG choose to characterise the new Captain as French?
8
Why was Picard so comfortable with his nephew?
38
What does "Et In Arcadia, Ego" refer to?
1
How does Starfleet's recording or measuring of time vary throughout the galaxy?