Why did Men in Black wear black suits?

In-universe, why did MiB uniform consist of black suits? Is there some significance to that attire?

And, why only black suits?

It would seem that their type of job, they would need to sometimes blend in - wear casual, or other kind of suit, or fake police uniform (rarely black).

The MiB frequently impersonate the FBI as part of their cover.

KAY: Give her time to get the wrong impression. Makes it smoother.

KAY: Yes, ma'am. I'm Agent Manheim, this is Agent Black, FBI. We'd like to talk about your visitor. - Men in Black - Subtitle Transcript

Since the public's impression is that the FBI frequently wear black suits (which is in fact true), it makes sense for MiB agents to do so as well.

To look as non-memorable as possible:

Zed identifies that the goal of an MiB's attire is specifically to prevent strong memories from being created:

Zed: You'll have no identifying marks of any kind. You will not stand out in any way. Your entire image is crafted... to leave no lasting memory with anyone you meet. 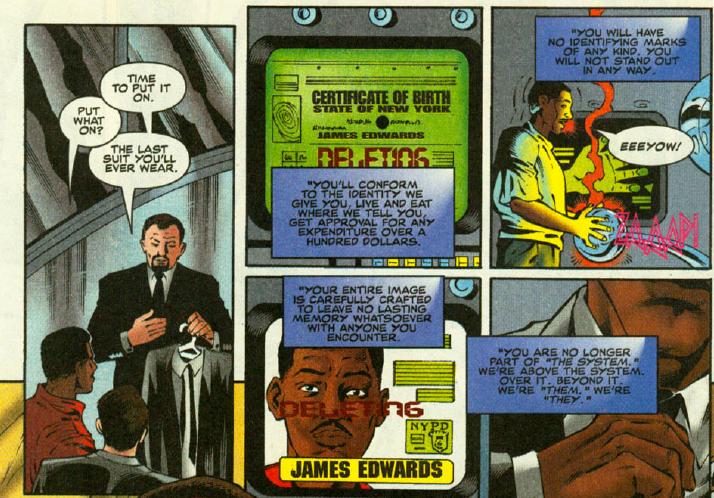 To conform to the myth

So that people will remember the suit, not who was wearing it

Zed said, "Your new image is being crafted so you don't stand out."

"I dunno, up in Harlem, that suit might make me look like a Muslim. Fit right in with Brother Farrakan and the Fruit of Islam."

Zed ignored him and continued: "You won't leave much of an impression in anybody's memory. What they probably will recall, if anything, will be the suit." - MiB: A Novel - Steve Perry

Obvious answer, they're meant to be the prototypical Men in Black which UFO folklore has covering up incidents by altering the scene and eliminating witnesses. Why black suits? They're associated with government figures due to a combination of formality requiring regular wearing of suits and low wages meaning that a government employee only owns so many suits — dark suits don't show stains as badly, so you can wear them more days in a row. Therefore, government agents, or beings want to look like government agents, would show up in a dark suit. In addition, you have the association of black with mourning clothing, which means that this monochromatic sartorial styling adds an association of death and lack of humor to the agents.

As to why the MiB of the movie universe haven't moved on to something less conspicuous, for one, the legends of dark-suited men coming around for strange happenings simply provides a standard uniform. People are likely to listen to someone who looks suitably governmental. Lastly, it provides a standard uniform for the group, providing a sense of unity and belonging, and I can vouch from experience that governments take a long time to change their stylings.

From a practical standpoint, suits make for lousy field clothing — they tend to be hot and restrictive, and the risk of damage in the field means you'd generally prefer to be wearing something else if you face combat. But in the context of supertechnology, a full suit makes sense because it covers much of the body, allowing you to hide armor, and typically includes many pockets, allowing you to hide more gadgets. The usual liabilities of heat and restriction are dealt with by futuristic materials.

No one looks twice at a casual gentleman in a suit and tie. To them they appear insignificant. Though a uniform all black with sunglasses perpetuates the classic "G-Men" government motif, a no nonsense, plain concept of mass uniformity, therefore virtually impossible to discern one individual from another, exactly how a government who has to hide details likes it. In reality most federal US law enforcement agencies have a dress code, though in real life, the FBI doesn't prescribe a uniform color suit.

Former FBI counter-terrorism agent Jon Tasch, explains, he wore a suit about 5% of the time.

28
Why is the MiB suit the last suit Jay will ever wear?

33
Men In Black: After Agent K's retirement, why was Agent J left as senior partner?
28
Why is the MiB suit the last suit Jay will ever wear?
10
Do any humans know about Division 6 / Men in Black?
11
In "Men in Black," why did Agent K neuralize every civilian who saw an alien?
16
Are the Men in Black an international organisation?
27
What real-life people have been outed as aliens in Men in Black?
21
If Men in Black don't exist how do they have homes?
62
Why did the villain in the first Men in Black movie care about Earth's Cockroaches?
7
In Men in Black International, how did Agent H change?