Why did the Tusken Raiders shoot at podracers?

During the Boonta Eve podrace, Tusken Raiders shoot at the podracers; from the The Phantom Menace Script

Four TUSKEN RAIDERS perched above the race course fire their rifles at the Pods racing in the canyon below them. One shot ricochets off the back of Anakin's Pod.

FODE/BEED : Looks like a few Tusken Raiders have camped out on the canyon dune turn.

Why do they do that? Did someone pay them to do so or is that just what those people do on a quiet Sunday afternoon?

The Tuskens have apparently had a long history of adversity against external settlers on Tatooine.
According to Wookiepedia the Tuskens were first disturbed by a group of settlers around 5000 BBY. These initial hostilities continued for centuries, derailing continued efforts to colonize and develop the planet.

After Tatooine was rediscovered by the Galactic Republic in around 5,000 BBY, early Human settlers were believed to have disrupted the water-supply of a settled cave-dwelling society known as Ghorfa culture, precipitating the transformation of the natives into the nomadic Sand People. To survive, they were forced to steal and adapt the technology of the colonists, forging the distinctive desert survival gear by which they would subsequently become so well-known. By around 4,000 BBY, they were also engaged in endemic low-level warfare with the settlers, raids which were among the factors that forced Czerka Corporation to abandon their attempts to operate Tatooine as a mining world...

Fast forward a couple millenia to around 550 BBY. While outsiders continue to attempt the develop the planet, an outsider gains the trust of the Tuskens and slaughters the local colonists. Then he kills the Tuskens. This likey precipitated a whole new level of hate in the Tuskens.

Alkhara ... [was] studying the Sand People, and seemingly gaining their trust. Eventually, however, he turned against the colonists and occupied the desert fortress that was used in earlier centuries...afterwards [he] turned on his Sand Person confederates, and destroyed their camp. This, it is claimed, was the source of a subsequent blood feud between the natives and the outlanders.

A couple of centuries later in a new colonization push the Tuskens are still holding their grudge. They launch a series of attacks against a local fort and earn their commonly known name, Tusken Raiders.

...the new colonists seem to have been unaware of the Sand People, but a series of attacks between 98 and 95 BBY forced the abandonment of Fort Tusken, and from that point on, the Human settlers of Tatooine referred to the natives as "Tusken Raiders".

So while you might have meant to be facetious when asking if shooting at the local racers was a fun sport for lazy Sundays, you may have actually been closer to the truth. That is, they were living up to their name of being Raiders and were harrassing settlers.

The Sand People really hate the settlers, periodically raiding their outposts and generally making nuisances of themselves as part of a long-standing grudge against what they see as interlopers.

On race days, the Tuskens apparently like nothing better than to bring a picnic lunch up to the "Tusken Turn" so they can try to kill the racers who whizz past. The Inside the Worlds of Star Wars: Episode I factbook indicates that this is sufficiently common (and frankly quite funny) that the race officials turn a blind eye to their activities. 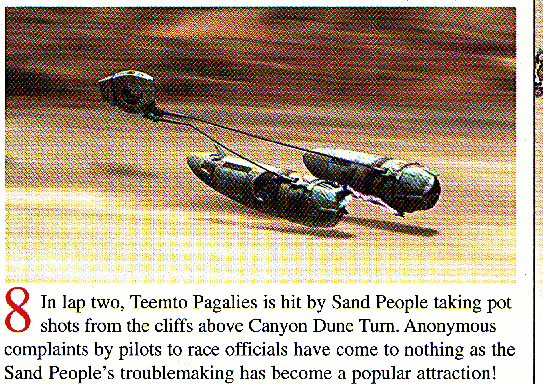 Due to their nomadic nature, naturally occurring water wells on Tatooine were regarded as sacred by the Tusken Raiders. The Mos Espa circuit we see in The Phantom Menace was built very close to one of these wells, the Gafsa Canyon, provoking the Raiders to take pot shots at the loud, uncontrollable and almost blashphemic pod racers.

27
Did Anakin actually use the Force to win the Boonta Classic?
16
Why couldn't Qui-Gon Jinn's Force ghost warn Yoda when Anakin killed the Tusken Raiders?
51
Why did Greedo shoot first?
2
Tusken Raiders mask inspiration
18
Why did Qui-Gon and Anakin need to hide the fact that Anakin built the pod-racer?
30
Why does Padme react this way after the Tusken incident?
22
Why did the Dreadnought not shoot the cruisers first?
5
Is the concept that humans are poor pilots seen anywhere else in the Star Wars franchise?
83
Why did Luke use his left hand to shoot?
33
What made the Tusken Raiders unable / unwilling to shoot down Luke's Landspeeder?