What was wrong with the Millennium Falcon in Star Wars Episode V: The Empire Strikes Back?

For large parts of Star Wars Episode V: The Empire Strikes Back, the Millennium Falcon is in pretty poor condition. Han and Chewie are desperately trying to fix it on Hoth while the Empire is attacking the Rebel base, and throughout the rest of the film it struggles to go into Hyper Drive.

But what caused it to be this way? The ship seemed to be in fine condition at the end of Star Wars Episode IV: A New Hope.

There doesn't seem to be an answer in the movies themselves, since the Falcon is already undergoing repairs the very first time we see it in Episode V, and I can't find an answer anywhere else in canon.

In Legends, the damage appears to have been sustained during the second mission of Star Wars Battlefront: Renegade Squadron, in which Renegade Squadron (including the Falcon) go to the remnants of Alderaan to retrieve a holocron with information vital to locating a new rebel base.

After this mission, the squadron travelled to Ord Mantell to get the Falcon repaired, but they were interrupted by an assassin droid there, which is presumably part of the reason the Falcon still wasn't fully repaired by the time it reached Hoth. I mention this because early in Episode V, Han says "Well, the bounty hunter we met on Ord Mantell changed my mind." So this plotline has at least some loose connection to one of the original trilogy movies.

The hyperdrive problems were a direct result of damage inflicted from the fleet of Imperial Star Destroyers pursuing the Millennium Falcon (or possibly the stormtroopers on Hoth).

Remember Threepio states the following after Han Solo and Chewie attempt to make the jump to hyperspace:

where "damaged" implies the hyperdrive motivator had been knocked out by the turbolasers.

You might think a warning light would have alerted Solo or Chewie that the hyperdrive was no longer functional, but where's the drama in that? :) (Perhaps the warning light circuit got fried as well, who knows.)

In new canon. The first issue has the main characters attacking an imperial base and C-3PO is in the Falcon and then some scavengers attack it, they start taking it a part.

My understanding is when Chewie starts to fix the Falcon he screws up the Hyperdrive as there's no reference to it being damaged before that. Chances are though that he only started making those repairs because of what happened during the events of the comic.

The falcon was damaged on Ord Mantel. It's actually explained on the record. 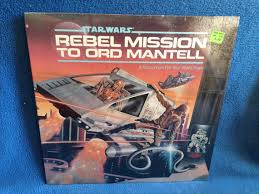 265
Why does everyone think that the Millennium Falcon is a piece of junk?