Why do the ellipses in the Star Wars opening crawl have four dots?

Most of the Star Wars movies, and many of the EU works, feature an opening similar to this one: 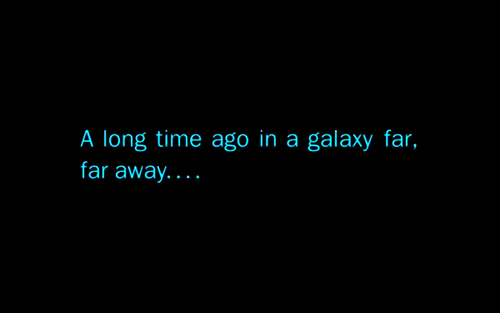 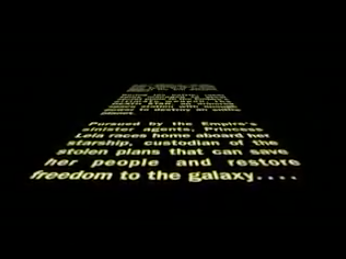 However, generally, ellipses have only three dots, as confirmed by Wikipedia:

Ellipsis … is a series of dots (typically three, such as "…")

Is there some creative reason Lucas chose to have four dots in the opening, or was it just a typographical error?

Perhaps because Flash Gordon did it?

According to Wikipedia, Lucas was influenced by Flash Gordon and similar programmes – he watched them as a child, which lead him to write his own space opera. Quoting the article:

Lucas has stated that the opening crawl was inspired by the opening crawls used at the beginning of each episode of the original Flash Gordon and Buck Rogers film serials, which were the inspiration for Lucas to write much of the Star Wars saga.

It cites the Revenge of the Sith DVD commentary, which I don’t have to hand, so I can’t check myself.

Here’s the final paragraph from the opening crawl of an episode of Flash Gordon: 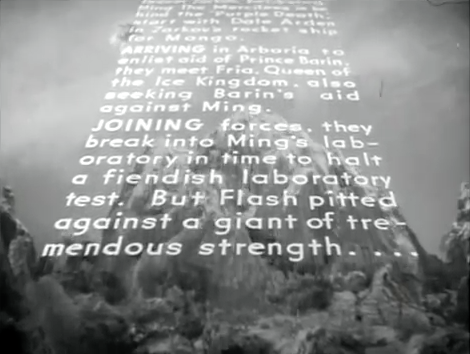 Notice that it ends with four dots, not three.

And maybe it’s just me, but it looks like the third and fourth dots are closer together than the first three – which might lend credence to the theory that the fourth dot is really a full stop. I misjudged it – see @NeilSlater’s comment for a more plausible spacing explanation.

I can’t find anything with Lucas acknowledging this, but there’s a good chance he used a four-dot ellipsis because that’s what Flash Gordon did.

A rule that I remember (from school?) is that, if an ellipsis occurs at the end of a declarative sentence, you use four periods — the ellipsis itself, followed by the period at the end of the sentence.  The Wikipedia article that you cite says something similar:

An ellipsis at the end of a sentence with a sentence following should be preceded by a period (for a total of four dots).

An "ellipsis" specifically refers to a set of three periods to indicate that some section of a quote has been omitted. As mentioned in the accepted answer to this question on the English language & usage stack exchange, when periods are used to indicate a pause in speech--which is what is presumably going on with the Star Wars opening crawl--they are called "suspension points". That answer quotes the Collins English Dictionary as saying:

Suspension point - mainly US one of a group of dots, usually three, used in written material to indicate the omission of a word or words. Compare ellipsis (sense 2).

If the group "usually" consists of three, that seems to indicate that it isn't absolute, and it might be acceptable to use more to indicate a longer pause.

It may be that this distinction between an ellipsis and suspension points is a fairly new one, though--this page seems to say The Chicago Manual of Style only started making the distinction in 2010:

Describing this other role of ellipses, The Canadian Style (2nd ed., 1997) says that they denote "a silence in dialogue, hesitation or interruption in speech, a pause in narrative, or the passage of time" (section 7.05). The Chicago Manual of Style (16th ed., 2010) says, in section 13.39, that in dialogue the points show "faltering or fragmented speech accompanied by confusion or insecurity."

GetItWriteOnline.com: Ellipses states, "The fourth dot stands for the period at the end of the sentence that we have not entirely quoted; it lets our reader know that the quotation borrows from more than one sentence of the original text."

I know this answer is similar to some others, which indicate that 4 periods get used if the quote matches the end of a sentence, or if multiple entire sentences are removed. However, the rule stated here is slightly different. This rule indicates that if the quoted part comes from multiple sentences, then a fourth period is appropriate.

If we assume that this was done intentionally (rather than a grammar error), then this simply implies that the part after "A long time ago in a galaxy far, far away" is a story that is much longer than simply a partial sentence.

I would say that it was simply typographic license. There are other examples in the crawl where exact proper grammar and punctuation has not been used correctly.

According to this article on the matter of four ellipses, it seems that they are to be used when an entire sentence has been removed. I am not entirely sure how relevant this is though!

More to the point, the Wookieepedia article on the Opening Crawl makes the observation that the Opening Crawl itself was influenced by the opening crawl of Flash Gordon; possibly Lucas derived it from there. This is just speculation and I haven't found anything to support it, but it is certainly possible.

The straightforward answer is:

it is not an ellipsis.

Note that an ellipsis has very specific meaning and purpose, that something has been omitted.

Indeed, note that these days in most word processors, when you type three dots, it (sometimes annoyingly) converts it to the single ellipsis character. (Not actually three periods...there's one single glyph which is an ellipsis.)

In complete contrast to an ellipsis ("something missing"), it's common in casual writing to do something such as the following: the car approached the wall and then......................bang!

For me a "lot of periods" kind of suggest "time passing" or "we're about to tell you the punchline" or "wait for it.....". We all do this all the time in casual writing; and it has nothing to do with an ellipsis.

Indeed the famous "Long time ago" example is indeed perhaps the most famous example of using "a lot of dots" like that (just as one very commonly does today in texts or email.............for various reasons such as in this sentence separating a "payoff" phrase. Or, to leave the reader hanging..............)

So, quite simply, it's not an ellipsis (it has nothing to do with "omitting something"); it's a "lot so dots" symbol, which is indeed commonplace in casual writing...........particularly emails or QA forum posts.

33
How did the aliens know about games from after 1982?
10
Star wars reference in Voyager's Caretaker

12
Did Disney officially call Legends/EU material “Not canon”?
5
How aware were the makers of The Force Awakens of Legends/EU Canon?
4
Does the Star Wars universe have immigration laws?
4
What elements of Star Wars were derived from Flash Gordon?
1
Who scored the opening Star Wars fanfare for Disney+?
21
What did the broadcast mentioned in the opening crawl say?
23
Why did “A Stanley Kubrick Production” not draw a fine, while “Lucasfilm Ltd.” did?