How tall was Barad-dûr?

Can someone calculate, from books description or from movies, the height of Barad-dûr?

I've found this on FB but it sounds too small to me!! 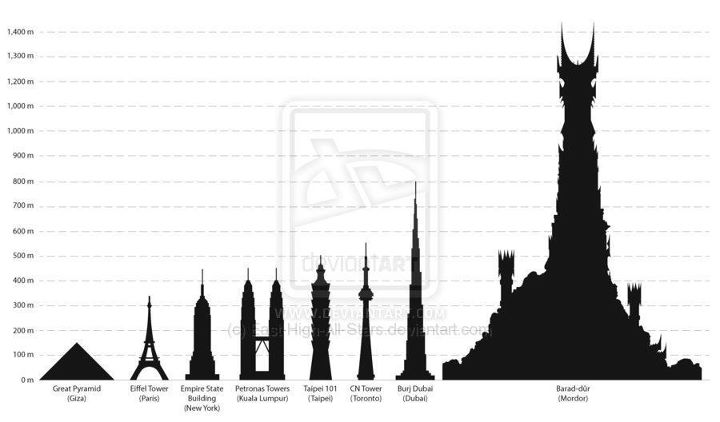 tolkiens-legendarium the-lord-of-the-rings statistics
Share
Improve this question
edited May 4 '21 at 2:56

Tolkien intentionally left details of the tower's construction and appearance vague. It was described as behind hidden by a cloud of shadow and darkness (probably both literal and metaphorical).

...rising black, blacker and darker than the vast shades amid which it stood, the cruel pinnacles and iron crown of the topmost tower of Barad-dûr...

The Lord of the Rings 6 III: Mount Doom

According to the Lord of the Rings wiki, the miniature model used in the movie (which Weta actually called "bigatures" since they would still dwarf a person) was the equivalent of around 1,500 meters (5,000 feet) tall. The movie also depicts it as visible from the Black Gate, which is 100 miles away (according to the books' geography), so that certainly sounds reasonable.

One of the comments on this thread on Planet Tolkien uses a number of passages from the books about Orthanc and Minas Tirith to attempt to estimate the height of the tower and comes up with somewhere on the order of 3,000 feet tall.

It looks like the image you found uses the Weta/bigature/to-scale measurement. How is that too small? It's 1.5 kilometers (almost a mile)! It's twice as big as the largest real building ever made, which is itself already absurdly tall!

Not the answer you're looking for? Browse other questions tagged tolkiens-legendarium the-lord-of-the-rings statistics or ask your own question.

43
Do Balrogs Have Wings?
17
Where was Grond made? Barad-dûr? Orodruin?
81
What was the tallest structure built in Middle-earth?
45
How tall was the Balrog of Moria?
8
Who lived in Barad-dûr?
1
Why didn't the Mouth of Sauron fight the Battle of the Black Gate?
64
Why does Sauron not permit his followers to use his name?
15
The different names of Mordor