In Star Wars: Rebels we meet a character named Ezra Bridger. At first his eye color appeared to be an unnatural purple color.

Other viewers have also noticed and commented on his purple eyes:

In terms of the appearance of the character the lavender/purple eyes and the blueish/black hair are curious choices -RebelsReport.com .

There's no doubt - his eyes definitely started out purple. However the character's main image on his Wookieepedia page shows his eyes now looking more blue-ish and the same page now claims his eye color is blue. 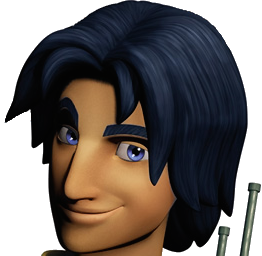 Did they change his eye color from purple to blue? If so, Why?

Wookieepedia is not necessarily an infallible source - the image in question appears to come from a guide book which may not have used "official" or production assets from the show but had secondary illustrations.

StarWars.com would be better - here is a gallery of stills from episodes. The color does appear to be different than just a basic blue

There are no Earth humans or Homo sapiens in Star Wars. Human actors are used to depict the main species in the story, but it would be naive to assume that members of that species actually are human looking.

And Ezra's face looks like he may belong to a different species than the main species, and thus may be a bit less Human in biology and looks than that main species. It is true that both his names are name used by English speaking Earth Humans, but that may be due to some translation decision or a simple coincidence. Ezra might actually look less Human than he is depicted.

And even if it is claimed that Ezra's ancestors were Earth Humans who colonized a galaxy far away long, long ago, it would not be unnatural for a Human to have deep blue or purple eyes. Humans with such eye colors are not unknown. I once waited on a woman in a store who had a boy with her with deep, dark, blue, possibly purplish, eyes.