Agents of Shield : Who is the banished inhuman from S03E08?

there was a inhuman who was banished because of various reasons and Hydra's founding goal was to get him back.

Is there any reference to this in Marvel history as to who is this guy?

This now has a canon answer.

This is Hive, also known as Alveus. 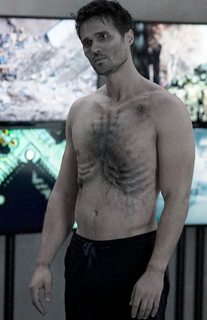 In the Marvel Cinematic Universe, Hive served the Kree, and was designed to command the Inhuman armies

However, his power grew too great, and he was banished to Malveth. Hive is a parasitic life form that possesses various powers, including the ability to infest and possess corpses, to take over Inhumans and twist their personalities to serve him, to consume others in order to make himself stronger, and to kill ordinary humans, either by stripping the skin from their bones or by infesting them from the inside.

As of Season 3 Episode 17, Hive inhabits the corpse of Grant Ward.

There is an interesting similarity between Hive and Kilgrave from Jessica Jones, both of whom possess the ability to force others to do their will through infection, though on the one hand Hive can only affect Inhumans, whereas on the other hand Kilgrave cannot change his victims' personalities.

Not the answer you're looking for? Browse other questions tagged marvel-cinematic-universe marvel agents-of-shield inhumans or ask your own question.

16
Who's the villain in Iron Man 3?
5
The Magical Place events from Agents of SHIELD
13
Are there any psychics available to the Marvel Cinematic Universe?
4
Who wrote the alien words in Agents of Shield episode 4?
16
Do all Marvel Films have a second, non-foreshadowing post-credits scene?
19
Has there been any foreshadowing of Captain Marvel in the MCU?
1
Who are Coulson's parents in Agents of SHIELD?