Why do snipers use blaster fire instead of bullets?

I wish to extend on this question in a more specific context: sniping.

A professional sniper, whether as an assassin or in battlefield conditions, has several priorities:

Snipers have always served primarily to target and eliminate high value targets, who as such less commonly wear heavy armour which is more useful for the frontline rank-and-file. This renders any debate about the effectiveness of blaster vs bullet against armoured foes largely irrelevant.

Yet at the same time, the way sniper rifles are implemented in this universe, it is typically a single unbroken beam from the rifle to the target (as observed in virtually every Star Wars game with such weapons) - every shot exposes the shooter! This ought to be a critical flaw in almost all use cases for a sniper. So why blaster technology for sniper rifles?

I haven't found a definitive in-universe explanation, but based on what we know about blasters and slugthrowers in the Star Wars universe there are some reasons to prefer the former over the latter as a sniper rifle.

Note: Slugthrowers in Star Wars are depicted very similarly to real-world firearms, so I will assume the capabilities and limitations of the latter apply to the former.

A blaster is easier to use than a slugthrower for long range kills since the latter requires adjustment for bullet ("slug") drop, wind effects, etc.

Slugthrowers are difficult to use against long range targets because the sniper needs to take into account the ballistic trajectory of the slug. Real-world snipers often work in teams with a spotter whose job is to measure distance, wind, etc., to aid the shooter. The difficulty of accounting for a slug's ballistic trajectory is compounded by the fact that snipers in Star Wars would generally need to fight on a variety planets with a different gravity, wind levels, etc.1

Blasters, on the other hand, don't seem to have this problem. For example, this gif2 from Star Wars Battlefront (which is largely canon) shows a long range RT-97C blaster shot and incoming blaster fire with no observable "bullet drop": 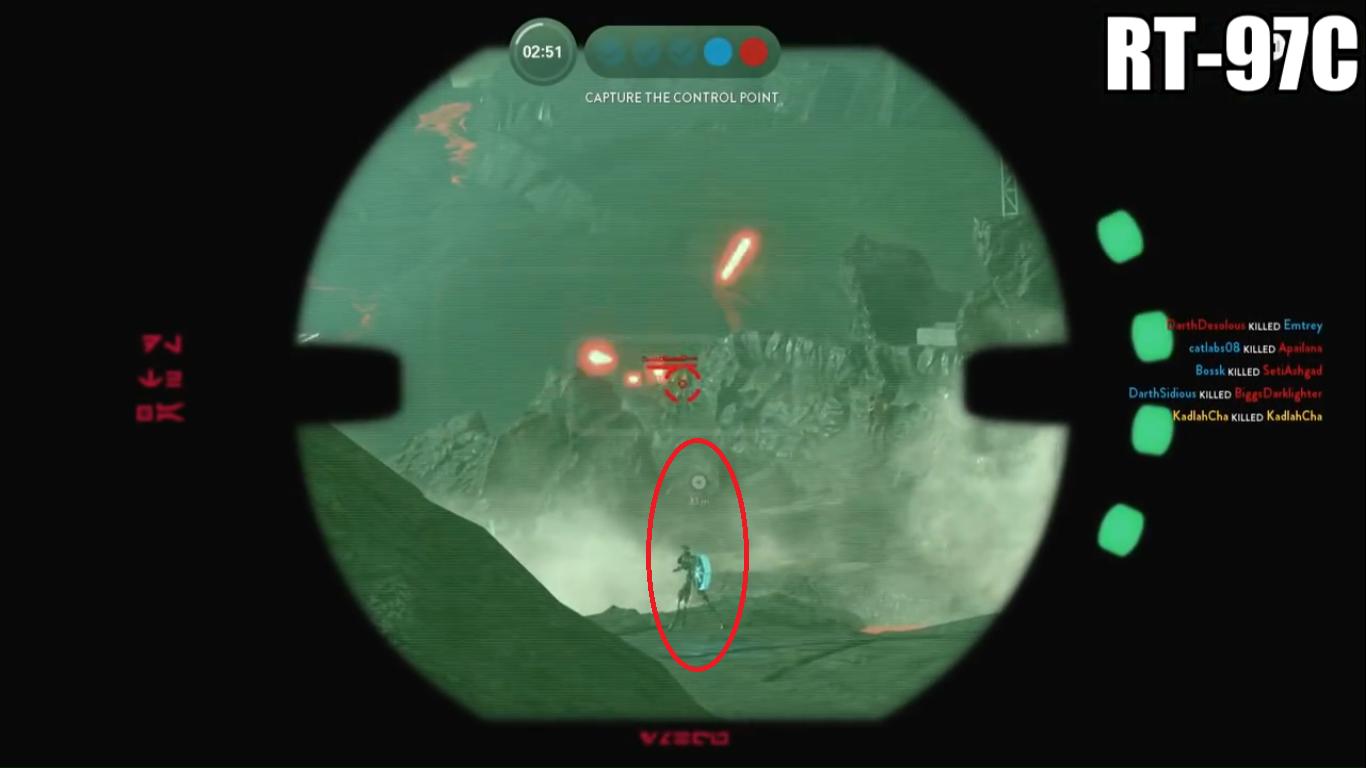 It's worth noting that the developer, DICE, is famous for other first person shooters -- e.g. the Battlefield series -- which do have bullet drop. The lack of "bullet drop" in Battlefront is not a game limitation.

A sniper using a blaster is therefore more likely to hit his target, even if he isn't the best of marksmen.

Slugthrowers are ineffective against most armor in Star Wars.

A slugthrower sniper rifle wouldn't be much more useful against a person who was only partially protected by armor (e.g. someone not wearing a helmet). It would already be difficult to hit a person due to the slug's ballistic trajectory, and forcing the sniper to aim for an even smaller target like the person's head would make the shot far more difficult. Even real-world snipers don't always aim for the head. For example, Chris Kyle mentions in his autobiography American Sniper that he usually didn't attempt head shots:

It can take a few shots to put someone down, especially the drugged-up crazies we were dealing with in Iraq, unless you hit him in the head. And contrary to what you’re probably thinking, not all sniper shots, certainly not mine, take the bad guys in the head. Usually I went for center mass—a nice fat target somewhere in the middle of the body, giving me plenty of room to work with.

From a practical standpoint, slugthrowers are extremely unlikely to kill an armored target.

Slugthrower sniper rifles have muzzle flash and are LOUD, and thus not necessarily much stealthier than a blaster that fires a visible bolt.

You can use a suppressor to reduce muzzle flash and make the slugthrower quieter, but that doesn't necessarily help much. To give some rough numbers, Wikipedia cites noise measurements of suppressed firearms and notes that in general the noise is still >100dB and on par with other loud noises like rocket engines and sirens:

Live tests by independent reviewers of numerous commercially available suppressors find that even low-power, unsuppressed .22 LR handguns produce gunshots over 160 decibels. In testing, most of the suppressors reduced the volume to between 130 and 145 dB, with the quietest suppressors metering at 117 dB. The actual suppression of sound ranged from 14.3 to 43 dB, with most data points around the 30 dB mark...

Moreover, some suppressors work in part by reducing the muzzle velocity to subsonic speeds (which requires even more compensation for additional bullet drop).

Blaster sniper rifles are more compatible with the other blasters in use, providing logistical benefits.

Blaster sniper rifles are also more likely to share components, ammunition, etc. with other blasters. This makes logistics easier and can help troops on the battlefield make the most out of the (possibly limited) equipment they've got. As a real-world example, Chris Kyle alludes to the benefits of weapon compatibility in his autobiography:

The Mk 12 was super-easy to handle, and was virtually interchangeable with the M-4, which, though not a sniper weapon, is still a valuable combat tool. As a matter of fact, when I got back to my platoon, I took the lower receiver off my M-4 and put it on the upper receiver of my Mk-12. That gave me a collapsible stock and allowed me to go full-auto.

The logistical benefits of using blasters for all small arms could be crucial to winning a war. General Dwight D. Eisenhower (who knows something about winning a war) is credited with this quote:

You will not find it difficult to prove that battles, campaigns, and even wars have been won or lost primarily because of logistics.

The primary advantage of Blaster Bolts over Bullets is accuracy (which is very important in Sniping).

Bullets are easily affected by wind, gravity and countless other variables. Becoming a professional sniper in real world isn't easy. I remember seeing a documentary about it. Professional snipers need to take even moisture into account before shooting. They need to give lots of thought and uncertain gut feeling and leap of faith are their friends. Also, success rate of real world sniping is very low when target is moving.

Blaster Bolts simplify lots of things because it's much less affected by environmental conditions.

Other than that long range sniper guns (based on bullets) give very high recoil, so snipers need to use very heavy guns fixed with grounds (that's why ahead of planning is required). With this big mobility hurdle, Star Wars snipers can barely work. Remember those bounty hunters who fly on jets, land somewhere and go in position, and change position if target is moving.

While your point is well taken regarding the direct line back to the sniper, it is worth noting that even in our real world, there is emerging tech that would allow a reverse trajectory to be plotted in real time from a bullet.

It is reasonable to infer that a super high-tech culture would have superior tech that could be deployed in a wearable device. Such tech would make the visible beam weapons no more revealing than a projectile weapon.

That being said and all things being equal, I can see a desire to use a beam weapon to eliminate environmental factors that could influence the trajectory of a bullet and lower the kill percentage.

While it is not a perfect answer, and I do agree with you it would make more sense, it is at least something to consider.

Not the answer you're looking for? Browse other questions tagged star-wars technology weapon or ask your own question.

43
Why would a slug thrower be more effective against a lightsaber/Jedi than a blaster?
29
Is stormtrooper armor not very strong or were the rebel guns just that powerful?
6
How canon is Star Wars: Battlefront (2015)?
5
Were slug throwers ever used as standard issue equipment for armies?

22
What is the earliest instance of the use of term "blaster" in sci-fi to denote energy-based weapon?
43
Why would a slug thrower be more effective against a lightsaber/Jedi than a blaster?
69
Why do blaster bolts move slower than the speed of light?
20
Why did the clones' blaster color change?
47
Do Stormtroopers ever use the sights of their E-11 blaster rifles?
4
Are lightsaber blades a different material from blaster fire?
7
Why do Jedi practice lightsaber dueling, and not blaster fire deflection techniques?
5
Did Anakin Skywalker ever use a Blaster?
50
Why does Luke draw his blaster instead of his lightsaber to deal with an apparent threat?