Did Bashir intentionally screw up his Starfleet final exam to hide his condition?

It's revealed in the episode "Distant Voices" that Bashir intentionally failed his final exam to make sure he wouldn't be valedictorian.

BASHIR: I made a mistake on the final exam.

ALTOVAR: But pre-ganglionic fibers and post-ganglionic nerves aren't anything alike. Any first year medical student can tell them apart. You purposely gave the wrong answer.

At the time, the explanation given is that he couldn't handle the pressure. But later, after it's been revealed that he is a genetically-modified human, Bashir says that he's taken steps to not appear as smart as he actually is.

LAUREN: How'd you manage to hide it for so long?

BASHIR: I did my best not to... exploit my abilities.

Setting aside out-of-universe reasons (my understanding is the entire storyline was a complete retcon), are there any indications Bashir intentionally didn't become valedictorian to avoid revealing his secret?

There is no answer in the episodes themselves. The OP's question contains two of the three references to the exam question that occur in DS9. (The third reference, which is earlier than these two, is when Bashir is anxiously hoping to reconnect with the class valedictorian who did answer the question correctly.)

However, the official Star Trek web site has the following to say:

A trick question during orals at Starfleet Medical about ganglia dropped him to class salutatorian...

The database entry, written after the conclusion of DS9, has chosen not to describe the question in terms other than as a trick question. It also makes no mention of Bashir intentionally messing it up. This seems to rob Altovar's claim of some credence.

Furthermore, intentionally messing up the question doesn't seem to fit with Bashir's personality as seen in the show. Throughout DS9, he is very concerned with coming first place in competitions of an academic nature, with curing "incurable" diseases (e.g. the Dominion-engineered Quickening virus), etc.

I suspect that when Bashir refers to not "expoliting his abilities", he is probably referring to holding back on his physical abilities and strength — his Khan-like strength and endurance would surely mark him out as an augmented human.

Finally, let's think about the ganglionic nerves and fibers themselves; 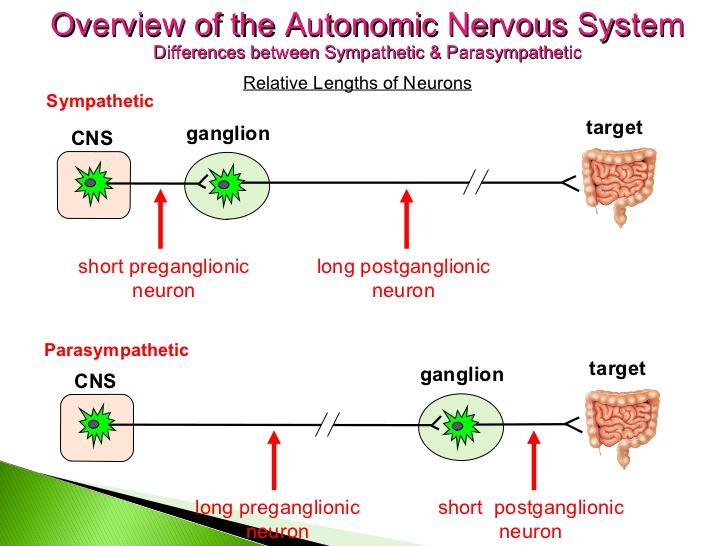 The only difference between preganglionic and postganglionic is the position of the fiber in the (central nervous system) -> (ganglion) -> (organ) chain of communication, as above.

One could imagine a tricky question in which it is unclear which is which (e.g. in a more complicated diagram involving multiple ganglia or organs).

On the other hand, the issue could be with the nerve versus fiber part of the statement rather than preganglionic versus postganglionic. It depends whether "nerve" refers to the "nerve cell" or to the "nerve fiber". With the former, there would be a massive difference.

Finally, the following dialogue from the episode "Dr. Bashir, I Presume" would seem to agree with my assessment above that he was not worried about his intellectual displays attracting the wrong kind of attention:

BASHIR: I was the star pupil.

O'BRIEN: And no one ever suspected?

BASHIR: Oh, there's no stigma attached to success, Chief. After the treatments, I never looked back. But the truth is I'm a fraud.

This line was incorporated by writer Robert Hewitt Wolfe in response to his (at the time pre-vet) wife:

Robert Hewitt Wolfe commented on his wife's reaction to Bashir's mistake: "Celeste was pre-vet. And every time she saw "Emissary" or heard Bashir's line about mistaking a pre-ganglionic fiber for a post-ganglionic nerve, she'd say, They're nothing like each other! No one would make that mistake'". In "Distant Voices", Wolfe had Altovar deliver the line: "But pre-ganglionic fibers and post-ganglionic nerves aren't anything alike. Any first year medical student can tell them apart. You purposely gave the wrong answer". Wolfe commented: "Altovar is correct. That's my way of saying, 'Well, okay' to Celeste".' (Star Trek: Deep Space Nine Companion)

Not the answer you're looking for? Browse other questions tagged star-trek star-trek-ds9 retcon or ask your own question.

42
Did Odo create his communicator or hide it?
13
Morally/Legally, how could Dr. Bashir, a Federation doctor, perform the operation he did to Worf's brother Kurn by wiping his memory?
20
Who did Khan get his Starfleet insignia from?