Which German comic does this (translated) image come from?

I recall finding out that this image comes from a German comic, but its name is lost on me. I've tried a reverse image search on Google, but with no luck. Could someone please tell me the name of the comic, and more about the story? I'm especially curious to know how it ends. Thank you. 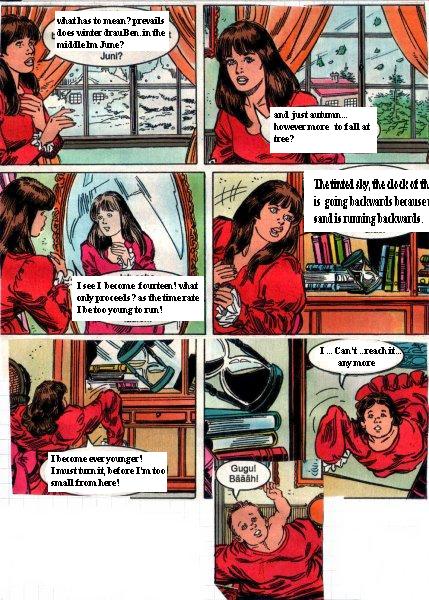 After searching enough, I was able to find an answer to my own question: this comes from the German comic horror series Gespenster Geschichten. This image comes from the story called "Die Uhr des Sensenmannes" (The Clock of the Grim Reaper), from issue 1570.

For the curious, from what I could gather, the young woman in the image has a dying father. When the Grim Reaper comes to claim him, she manages to steal the hourglass that represented his time, and make the Grim Reaper spare her father. She then puts the hourglass atop a few books on a table, but rats come in and flip it, causing time to rapidly turn backwards for the young woman. This causes her to get younger until she vanishes, at which point the Grim Reaper comes back to collect his hourglass, and claims the father's soul offscreen.

3
2000AD comic from the 80s featuring a giant shark
6
What classic SF story involved intelligent dogs being the secret masters of humans?
9
Comic book with a boy and animals
6
Comic about 3rd reich after WWII
46
What is the context for this panel of Captain Marvel(Shazam) and a vibrating mechanical horse?
5
Late 50s comic: Lonely or Lost Planet; Earth is under occupation by green aliens wearing menacing helmets
5
ANALOG story about Genetic engineering