In the movie Constantine, John is dying from cancer. At one moment in time he cuts his own wrists in order to die early and force Lucifer to come and take him so he can tell Lucifer about what is going on with his son so he can intervene. This action is valued as self sacrifice so Constantine starts moving towards heaven, Lucifer removes the cancer tissues from Constantine's lungs thus forcing him to stay alive.

Although I understand that Lucifer wanted him to stay alive so he can get another chance at taking Constantine to hell, cancer was not what killed Constantine at that moment but the fact that Constantine committed suicide by cutting his own wrists. We do not see Lucifer healing those wrists yet Constantine stays alive.....

The film was based on the Hellblazer comic arc Dangerous Habits by by Garth Ennis. The comic details it a bit more:

In the comic, the devil[1] heals John Constantine, explicitly saying he will heal both his slit wrist AND his lung cancer; and does just that. 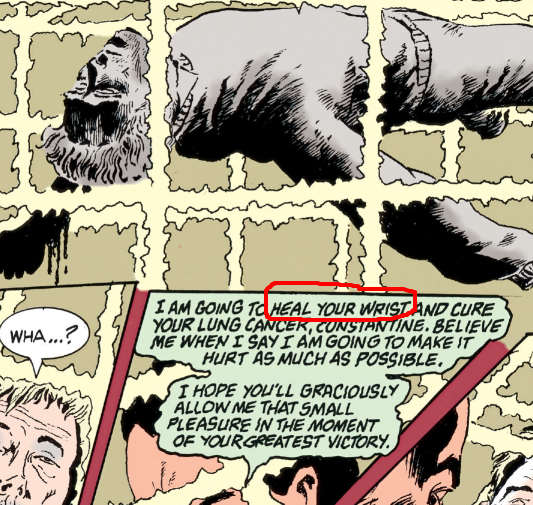 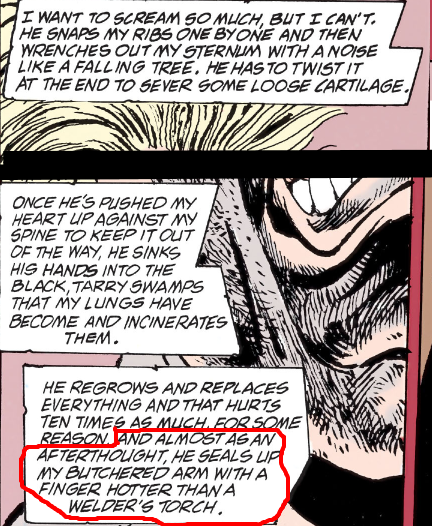 As you notice, when they detail the healing of lung cancer and it's far more involved than simply sticking hands inside his chest - it's basically a major medical procedure involving breaking and regrowing ribs, incinerating and regrowing lungs, moving the heart, etc... by comparison, healing a slit wrist and replenishing blood supply seems rather trivial as an aside.

[1] the demon is one of 3 brothers - the storyline is a bit different from the film and covered in the Wikia; the reason they don't want him to die isn't due to going to Heaven but because he sold his soul to all 3 of them so they'd have to fight over it

as @Daft pointed, its a minor plot hole:

From the movie script

SATAN The sacrifice!! No!!!! THIS ONE BELONGS TO ME!! You will live, John Constantine, you will live so you'll have the chance to prove that your soul truly belongs in Hell. You will live!

So its simple that wanting John to live Satan also healed his wrists - otherwise he would save Constantine from cancer but not from bleeding out again.

Please don't look for reference in the comic book series, which doesn't have much to do with the movie (or rather the other way around): in comic book Lucifer is gone - bored of his job as a Satan he decided to retire - his place is taken by three firsts of the Fallen (one of them fell even before Lucifer). Constantine tricks them, by summoning them one after another and selling his soul to each of them. When he finally dies, all three show up, but they are unwilling to remove their claim to others, they've decided to heal him instead, although in most painful way.

Not the answer you're looking for? Browse other questions tagged dc constantine-2005 or ask your own question.