Was Otachi the first flying Kaiju?

In Pacific Rim we see Gipsy Danger fighting Otachi, midway through the fight Otachi slams Gipsy to the ground (well, onto a roof) before spreading her wings and flying the pair into the upper atmosphere.

As a member of the audience I was surprised, the other Kaiju we've seen where huge lumbering monsters but the characters didn't seem too shocked.

Was Otachi the first flying Kaiju or could some of her predecessors fly?

Otachi appears to be the first kaiju* to come through the breach and that was able to fly.

There was, however, at least one Kaiju to come through with vestigial wings, but it is left unnamed in the novelization.

Some of those images were tattooed on his cerebral cortex the way Yamarashi was in the skin of his arm - and Hammerjaw on the back of his calf, and another kaiju, from Shanghai the year before, spreading its vestigial wings across Newt's shoulders

It is possible that the passage refers to Scissure, which appears in the Pacific Rim: Tales From Year Zero comic. 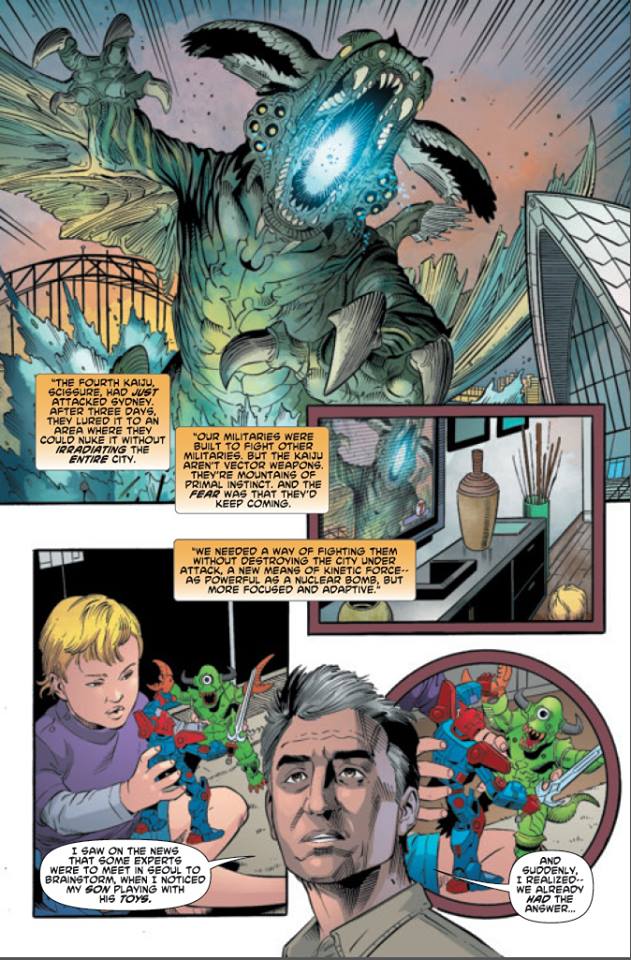 When Newt drifts with the brain of the Kaiju, he sees an unnamed kaiju with wings.

Note: SIC, Newt is sort of going crazy while he's watching this happen.

Newt later watches Otachi unfold her wings for the first time. While he doesn't specifically identify it as the first flying kaiju, his internal reaction and description indicate that it is.

It raised its arms, and Newt got another surprise as it unfolded its wings - they were much larger than the failed version he had seen in his Drift. That kaiju had looked like a child's drawing of a flying kaiju, done with a child's idea of things like lift and load-bearing balance. These wings spanned twice the kaiju's height and when they began to beat, cars blew away underneath them. They beat slowly at first but quickly gathered speed until their motion was a blur. Newt found it uncanny how much the progression reminded him of Jumphawk rotors powering up.

Hannibal Chau makes a remark that makes it sound like other kaiju have had wings, but this does not contradict Otachi being the first one being able to fly.

"Okay, go for the wings first, the Germans go crazy for those things," Chau was saying. Then he saw Newt and stopped.

*While Otachi was the first kaiju that came through able to fly, one may also consider the fact that the someone (probably the Precursors) seemed to have also sent the dinosaurs - many of which were able to fly.

Newt considers the dinosaurs as "earlier, cruder version[s] of the kaiju".

He almost told Chau that he thought the dinosaurs were an earlier, cruder version of the kaiju, but he just barely held himself back.

He notes the most fundamental difference/upgrade between the dinosaurs and the kaiju.

The dinosaurs had been a dry run. Whoever sent them hadn’t liked what they had found. So they waited for the climate to change, and while they waited they did a carbon-to-silicon upgrade. Bam!

Not the answer you're looking for? Browse other questions tagged pacific-rim kaiju or ask your own question.

11
Who names the Kaiju?
6
Does "Pacific Rim" have references/influences from kaiju / mecha genre?
8
Were the Kaiju metamorphic animals?
4
Did Kaiju release toxins?
6
What Caused the Kaiju Frequency to Increase In a Specific Pattern?
5
Right foot symbolism in Pacific Rim
7
Why aren't the scavengers affected by the toxin in the kaiju blood?
2
After a Jaeger goes down and is destroyed by a Kaiju, what happens afterwards? What’s standard protocol for a situation like this?