Do we ever see the full Promenade directory on screen in Star Trek: Deep Space Nine?

According to memory-alpha the Deep Space Nine promenade directory of businesses contained a large number of in-jokes and references to other sci-fi shows:

The directory appeared on the Promenade beginning with Season 2. The DS9 art department incorporated numerous jokes and references in the directory's listings, including "Jupiter Mining Corporation" and "Diva Droid" (both references to Red Dwarf, being the company that operated the ship Red Dwarf and the company that built the service droid Kryten respectively), "Milliways" (The Restaurant at the End of the Universe from The Hitchhiker's Guide to the Galaxy), "Spacely Sprockets" (The Jetsons), "Del Floria's Tailor Shop" (The Man from U.N.C.L.E.), and "Chez Zimmerman" (a reference to Herman Zimmerman, the show's production designer and the man responsible for much of the look of the Promenade set).

I was wondering if any of these are ever visible on screen in any episode of Deep Space Nine?

Yes. We're shown a (reasonably) clear shot of the promenade directory in the "Inside DS9 with Mike Okuda" featurette on the S5 DVD.

A similar (note, not identical) listing is found in the DS9 Companion 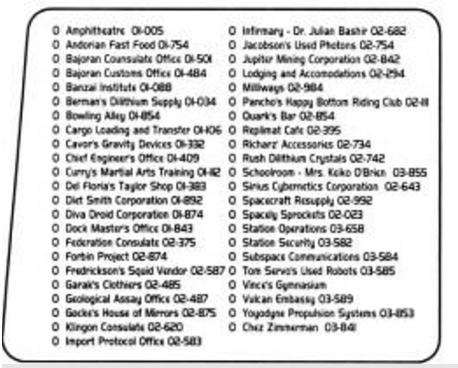 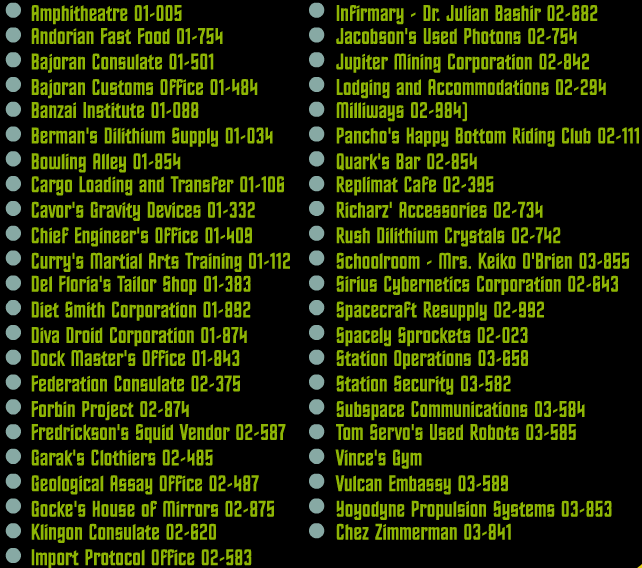 Let's see how many of these I can annotate from memory.

Diet Smith is the billionaire inventor from the Dick Tracy strip, inventor of the Two-Way Wrist Radio and the Space Coupe.

Cavor's Gravity Devices is a reference to Dr Cavor, inventor of Cavorite in The First Men in the Moon by H. G. Wells

Tom Servo's used robots is a hat tip to MST3K

The Happy Bottom Riding Club was a dude ranch, restaurant, and hotel operated by aviator Pancho Barnes near Edwards Air Force Base (I looked that one up - I thought it was a Cisco Kid reference at first)

44
What are all the jokes on the DS9 Promenade Directory?