Does Katniss depict proper handling of a bow?

In the Hunger Games movies, Katniss uses a bow as her primary weapon. Not considering her actual shots (hitting her targets), does Katniss show how to properly use, hold, and handle a bow? Did Jennifer Lawrence have to learn how to handle a bow for this part, or did they simply just say, "Here, hold this fancy bow and pretend to use it"? 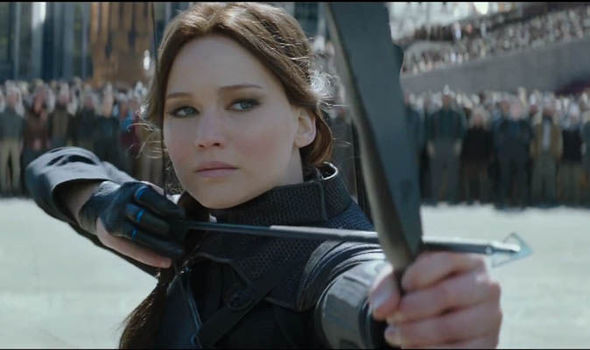 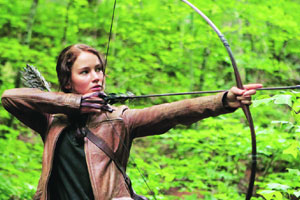 To prepare for her role as "Hunger Games" heroine Katniss Everdeen, Lawrence trained with professional archer and Olympian Khatuna Lorig to learn how to properly shoot with a bow and arrow.

"She was lovely," Lorig told the Associated Press. "We had a great time coaching and working together."

Given her connection to the film, Lorig was one of six Olympians featured in a recent Glamour spread. The Olympic archer, together with a few of her fellow female archers, will also grace the cover of an upcoming special-edition "Hunger Games" DVD.

Katniss's archery performance is mostly genuine, but she should hold her bow differently and she might be unrealistically fast.

A detailed rundown of her skills can be found in this article from a professional archery website. They go through various aspects of Lawrence's shooting and give it a verdict "Real or Not Real" (a Mockingjay in-joke):

We know Jennifer Lawrence’s original archery coach was Khatuna Lorig, a five-time Olympian and Olympic medalist who clearly taught her how to shoot well. However, we also know Hollywood takes liberties with shooting form. So, are Katniss’ archery techniques real? Do they line up with the steps of shooting that USA Archery teaches? Let’s take a look.

The “Catching Fire” archery simulator scene shows Katniss’ feet slightly angled toward the target, with her front foot slightly behind her rear foot, giving her an open stance. Verdict? Real.

Katniss has her knuckles curled around the bowstring, which is not correct; the back of her hand should be flat and relaxed, and the bowstring placed closer to the first joint of her index, middle and ring fingers. Her grip – the hand that holds the bow – also shows a finger on the arrow, which isn’t safe. We’d change this part of her archery techniques. Verdict: Not real.

Jennifer Lawrence has beautiful red-carpet posture, and it shows when she’s in character, too. Her Katniss has a flat back, low shoulders and she usually appears to be in good alignment. Verdict: Real.

In archery, setup is the act of raising the bow. Katniss raises that bow fast, but then delivers a knockout punch. We’d tell her to slow down, but otherwise, Katniss’ setup is a good start. Verdict: Real.

We’d love to see Katniss raise the bow and draw the bowstring back more slowly, with a smoother motion. That would help her to keep her upper body in better alignment, and give her a stronger shot. Verdict: Real … but needs work.

With a longbow (the bow type Katniss shoots), archers usually pull the bowstring back to at or above the corner of the mouth. This is called the “anchor point.” Katniss uses the under-the-chin anchor point commonly used by Olympic recurve archers, and we often see her drawing the bowstring past her anchor point, which is a no-no. Verdict: Not real.

Once she’s reached her anchor point, we see Katniss pulling her elbow just a little farther back, transferring the bow’s weight into her back muscles before she shoots. Verdict: Real.

We can’t be certain when Katniss starts aiming, but top archers do not aim until they have fully drawn, anchored, and transferred the bow’s weight into their backs. Once they’re fully aligned, they aim for two to three seconds. Verdict: Real…we think.

Coach Khatuna Lorig said she worked on this with Lawrence, and it shows. Katniss keeps her draw hand near her face and neck as she releases the bowstring, and follows through with strong back muscles. Verdict: Real.

Overall? Lawrence’s Katniss is the real archery deal. We would encourage her to slow down when possible because resting between shots is essential for strength and good shooting. But who are we to argue with a woman who shoots explosive arrows into the sky?

And from this interview with Van Webster, the Pasadena Roving Archers director of instruction:

As a coach, in what ways would you improve her technique?

It’s hard to tell from the short clips, but the bottom line is there is too much movement.

Would anyone realistically be able to shoot as accurately as she does with that much movement?

There are people that can shoot that well, but not with the kind of movement portrayed in the film. All of that is computer-generated. We had the same problem in Avatar. The director wanted to use a shooting technique that was not one that would work in an environment where you were trying to produce accuracy. But it looked good visually.

Yes, Jennifer Lawrence was apparently trained by Olympic level archers. So I'm sure she had very good technique, based on actual archers.

However - all of her training was precisely Olympic-style archery, aka target archery.
Katniss would not be shooting at a stationary target, nor would she be standing very still for very long (I admit I am guessing, as I have not seen much of the movies).

As Lars Anderson points out in this fascinating video, so-called "War archery" is quite a bit different - and looks mostly different from what Katniss - and most other Hollywood archer characters - tend to do.

(See also some verification of his claims here).

Perhaps the only thing she got genuinely correct was keeping both eyes wide open, instead of squinting with one eye, as is often done in target archery.

Jennifer Lawrence was trained by an Olympic athlete.

Khatuna Lorig has a cornucopia of accomplishments to be proud of: she’s mastered the sport of archery, competed in five Olympic Games, and won a silver and a bronze medal. But despite all of this, the achievement most likely to garner squeals of delight from strangers is the fact that she is responsible for teaching Jennifer Lawrence how to shoot a bow and arrow in The Hunger Games.

Lorig, an archer from Georgia (the country) who competed for three different countries at four different Olympic Games, was making the transition from medal winner to archery coach when she was asked to teach the then-21-year-old rising starlet the sport she’s spent her whole life perfecting.

Lars Anderson is an amazing archer, but the idea that archers ever had wildwest style close rage rapid fire shootouts is nonsense. Mongol and Turkish archers all carried swords and other weapons for close combat. Also, their bows were of military draw weight, from 70 to 110lbs, so until Lars can replicate his feats with bows this powerful he's just an amazing stunt archer.

Another misconception about military archery is that aim was particularly significant. The idea of military archery was to lay a continuous barrage of arrows into a body of men; aim was confined to distance and general direction. By the time aiming range was reached a wise archer would have picked up his sword, ax or club. In a military scenario the ability to pull a strong bow quickly was much more important than hitting bullseyes.

Katniss's style should have been based on Howard Hill's or modern primitive (I know) archer, Ryan Gill's.

26
In Avengers, how plausible is Hawkeye's archery proficiency?

18
What are the special properties of Katniss' bow?
18
How does Thresh know about Katniss and Rue's friendship?
15
What does Katniss' song "The Hanging Tree" mean?
6
Which military rank does Katniss hold?
6
Is President Snow sadistic or simply ruthless?
17
Who has forbidden Katniss' 'Hanging Tree' song?
7
Why did President Snow tell Katniss to "let it fly" when she was pointing her bow and arrow at him?