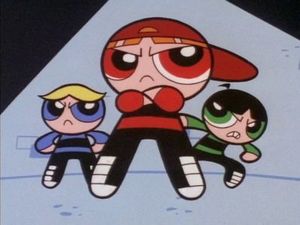 The initial 'recipe' came from Professor Utonium himself, who saw no problem giving away the secret to the most powerful creations the world had ever seen over the phone, but the more 'manly' replacement for Sugar, Spice, and Everything Nice was Snips, Snails, and Puppy Dog Tails. These ingredients were taken from the Nursery rhyme "What are little boys made of?".

The replacement for Chemical X, which MoJo JoJo lacked in prison, was black slime found on a prison toilet.

16
How was Mojo Jojo created?
2
Is there an explanation of what would have been created without Chemical X?
5
Who and what is Him?
4
Is the Mayor anything other than a bumbling oaf?
6
What is the correct spelling of the head of the Derbytantes group?
6
Powerpuff Girls Supervillain School