When Are the Nanites First Mentioned in Red Dwarf and What Was Their Purpose?

At the end of Series V, in Red Dwarf, we see them battling the Despair Squid. Then, in the next episode, they are revived after 200 years in suspended animation and the Red Dwarf has been gone all that time (it was not there when they got back to where it should be after facing the Despair Squid). Later we find out this was all due to the nanites.

Now I know Red Dwarf is not big on continuity, but I've never been clear. Just where did the nanites come from and what were they made for? I got the impression they were onboard the Red Dwarf for maintenance and were part of the ship, or part of the tools included with the ship and they essentially went rogue.

Where did they come from? What was the reason they were created? And when were they first mentioned? Was there any hint of their existence before Psirens, when the Large Rouge One vanishes?

There's a web comic, Prelude to Nanarchy (also available as a PDF), set at the conclusion of Series V that links Series V through VIII and explains what happened.

The nanites were part of Kryten's self-repair system (presumably always inside of him), but they found living in him "depressing", and so left to find a new home. After the crew repair the damage the nanites did leaving Starbug, they chase after them, but know that it will take a long time (because "it left in one hell of a hurry, as if unhindered by its own mass") - the final panel ends with "To be continued ... in about 200 years ...". 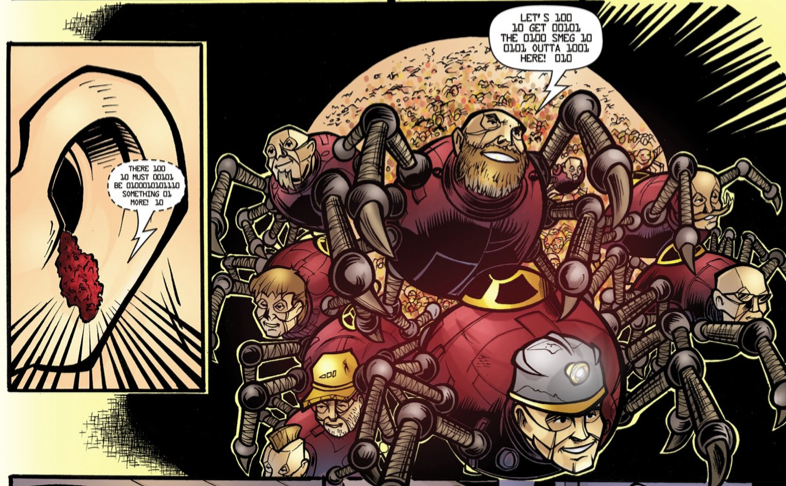 The web comic was published long after Series VI (Series V was 1992, Series VI 1993, the web comic 2005). It was promotional material to go with the release of Series VII on DVD (Nanarchy is the final episode of Series VII, and brings the nanites back into the main storyline at the start of Series VIII).

Because this was done after the fact, it fits nicely with canon at that point, without glaring continuity issues. However, Back to Earth screwed this up, as they themselves note:

(The story is a nightmare for continuity buffs, of course. Having finally connected elements of Series V, VI and VII, Back to Earth came along and established that the boys did, in fact, return to Red Dwarf at the end of Back to Reality - allowing Cat to smuggle a female squid on board. We'll leave you to worry about this for yourselves.)

3
Would guys from the Red Dwarf respawn if their future bodies kill themselves?
14
Which Red Dwarf Ship is the "Real" One?
8
What and where is the technology used to project Rimmer in Red Dwarf?
45
Did Arnold Rimmer kill the Red Dwarf crew?
5
What happened between Red Dwarf series VIII and "Back to Earth"?
6
What is the name of the track Rimmer is listening to in Red Dwarf IX when the others are in the diving bell being attacked by the despair squid?
11
What is the meteor/rock protruding from the Red Dwarf?
12
Why do Lister and Rimmer live together?
4
Did Rob Grant ever expand on the cliffhanger at the end of "Backwards"?
3
Does a cross-section of the Red Dwarf ship exist?