I remember reading Comic World by Diamond Comics (India) in 90s. This was a digest kind of comics featuring stories from lots of different comics (Indian and foreign both).

It contained a Spider-Man story. I remember this story because I encountered similar story in the Spider-Man 2 movie in the next decade (which wasn't surprising because movies are often based on comics). Here's what I remember from that story:

Can you please identify the original comic (probably by Marvel) from which Comic World borrowed it? From the quality of the graphics, it looked much older (60s, 70s) but it can't be newer than 90s.

I can't think of any better explanation than that of the Marvel wikia:

With the Parker household desperate for money following the death of Ben Parker, Peter Parker decides to continue in show business as Spider-Man. However, not only does he find it impossible to cash his paycheck (made out to Spider-Man), but the irrational editorials by J. Jonah Jameson in the Daily Bugle effectively quelch his career. Besides denouncing Spider-Man as a publicity-seeking phony, J. Jonah Jameson also publishes articles lauding his son, John Jameson, a courageous astronaut about to be launched into orbit in a space capsule. J. Jonah Jameson calls his son a "real hero."

The day of the launch finds Peter Parker at the launch site as an observer. The rocket takes off successfully, but a guidance system error causes it to go wildly off course and re-enter the atmosphere. Spider-Man appears at the launch site and offers to replace the defective 24-3B guidance unit in the plunging capsule with a spare. Because there is no way for the military to get to the capsule in time, they allow Spider-Man to try.

Spider-Man commandeers an aircraft and pilot, and together they fly toward the space capsule's re-entry point. Although the capsule is falling fast, Spider-Man manages to get hold of it with his webbing and climbs aboard. He quickly replaces the faulty guidance unit. As a result, John Jameson regains control of the capsule, gets it properly oriented, and opens its parachute. To the joy of all concerned, the astronaut is saved. 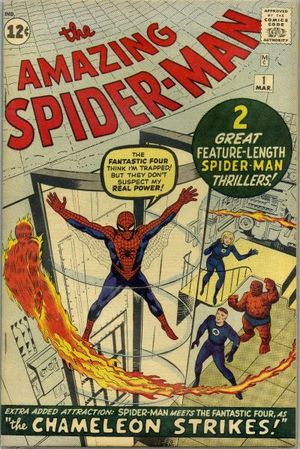 quoting the Wiki to John Jameson:

John Jonah Jameson III was born in New York City. He is the son of J. Jonah Jameson, the irascible, gruff publisher of the Daily Bugle. Jonah is immensely proud of his son, whom he sees as a true hero. Initially an astronaut, he was first seen being saved by Spider-Man when his craft malfunctioned on re-entry,

which in turn points to

so its from The Amazing Spider-Man #1

Not the answer you're looking for? Browse other questions tagged story-identification spider-man episode-identification marvel diamond-comics or ask your own question.

9
When (and why) was Spider-Man called the most important hero of them all?
11
Has J. Jonah Jameson ever accused Spider-Man of being a mutant?
2
Which continuity does the 2015 Amazing Spider-Man comic take part in?
9
When did Spider-Man lose his under-arm webbing?
11
Was the Spider-Verse arc inspired by Spider-Man: The Animated Series?
10
Marvel Comic with Ant-Man and Spider-Man holding a weapon
10
Spider-Man and Fantastic 4 crossover comic with Double Identity Scene
11
Was there ever a film, comic, or toon where Batman had Spider-Man's (or Spider-Man-like) powers?
9
Looking for a Spider-Man comic from the 1970s where a telepathic man-child controls a town, is defeated when Spidey "deafens" him?
9
In the comics is Spider-Man special in that there is always a different version of him across realities?