How did they choose exactly same looking young actors in "Star Trek" (2009)?

The first thing which amazed me while watching Star Trek (2009) was the exactly same looking young Enterprise crew. It made me happy because it meant that we didn't lose the legacy. Some doesn't look same like Christopher Pike and Scott, but if you look at Kirk, McCoy and Spock (the main characters (also favorite of all) who are on-screen most of the times)... Spock is easy one, but Kirk is difficult one.

How did they choose exactly same looking crews? Are there SFX effects involved too?

The short answer... they didn't.

The long answer (which does't include SFX beyond "hair and make up").. they chose actors to fit the characters for Kirk (Corn fed Iowa farm boy), Spock (Tall dark & impassive) etc. Then they go through hair and makeup, this makes them superficially similar to the actors you know and love.

Then the real magic happens. The actors play their parts, and embody the characters.

For example, the actor Karl Urban doesn't look much like the actor DeForest Kelley 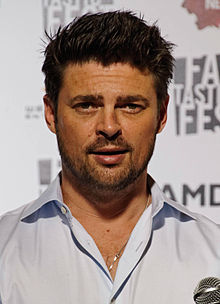 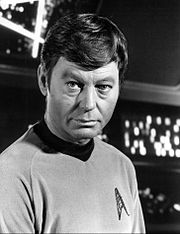 But Urban's portrayal of Doctor Leonard "Bones" McCoy is incredibly convincing, and arguably the best "new for old" character in the movie.

Also be aware that you were expecting to see those characters, so your imagination helped complete the illusion that the new actors were so very similar to the old.

Pine felt he had to show Kirk's "humor, arrogance and decisiveness," but not Shatner's speech pattern, which would have bordered on imitation

Like Pine, Urban said of taking on the role that "it is a case of not doing some sort of facsimile or carbon copy, but really taking the very essence of what DeForest Kelley has done and honoring that and bringing something new to the table".

Not the answer you're looking for? Browse other questions tagged star-trek star-trek-2009 star-trek-reboot or ask your own question.

18
In "Star Trek" (2009), how did the Enterprise collide with debris while the shields were on?
36
In Star Trek (2009), Did the Original Timeline Survive?
2
Broken bonding in "Star Trek" (2009)
16
Star Trek 2009 - Kirk crashing near Spock's cave - coincidence?
29
How would Starfleet know what a Romulan looks like in Star Trek 2009?
7
Robert April in the alternate timeline
28
Why did Spock Prime suggest Kirk take command of the USS Enterprise from young Spock?
19
Does Abram-verse Trek acknowledge the different physical appearences of the crew?