What happened to the Jedi Temple during the Imperial period?

This question is different from this one as the subject of that question is the Temple's information archives, whereas the this question's subject is the temple complex itself. Was it demolished, abandoned or put to any particular use?

Answers for both Legends and Disney canon is desired.

According to Disney Canon novel Tarkin by James Luceno, the Emperor used it as Imperial Palace.

BRIGHT-SIDE CORUSCANT air-traffic control directed the Carrion Spike to the Imperial Palace, and there into a courtyard landing field that was large enough to accommodate Victory- and Venator-class Star Destroyers. As repulsors eased the ship down through the busy skyways and into the court, Tarkin realized that the Emperor’s current residence had once been the headquarters for the Jedi—though practically all that remained of the Order’s elegant Temple complex was its copse of five skyscraping spires, now the pinnacle of a sprawling amalgam of blockish edifaces with sloping façades. ("Tarkin" by James Luceno, Chapter "Imperial Center")

The reason for that wasn't simply political - it was Sith related.

The two of them were in Sidious’s lair, a small rock-walled enclosure beneath the deepest of the Palace’s several sublevels that had once been an ancient Sith shrine. That the Jedi had raised their Temple over the shrine had for a thousand years been one of the most closely guarded secrets of those Sith Lords who had perpetuated and implemented the revenge strategy of the Jedi Order’s founders.

The Temple was heavily renovated, except for the Galactic Map

One of the few areas of the former Jedi Temple that had not undergone renovation was the holographic galactic map, an enormous globular representation of the galaxy located mid-level in what had been the Jedi Council spire. The Order had used the map to keep track of its far-flung members; now it served to identify trouble spots in the Emperor’s realm. The Emperor had consented to allowing the members of his Ruling Council to confer with

As repulsors eased the ship down through the busy skyways and into the court, Tarkin realized that the Emperor’s current residence had once been the headquarters for the Jedi—though practically all that remained of the Order’s elegant Temple complex was its copse of five skyscraping spires, now the pinnacle of a sprawling amalgam of blockish edifaces with sloping façades.

The Jedi Temple became the place of residence for Emperor Palpatine:

The renovated Jedi temple can even be seen intact on Coruscant in Return of the Jedi after the Battle of Endor.

The Jedi Temple remained abandoned until after the Battle of Endor. 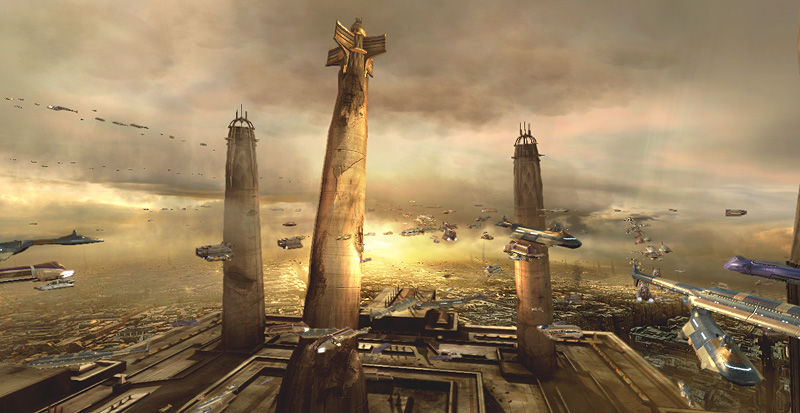 Galen Marek traveled to the abandoned Jedi Temple around 2 BBY. He found it in ruins and overrun with Imperial troops. The Force Unleashed

Luke went there after the second Death Star was destroyed:

It wasn't until the New Republic drove the Empire from Coruscant that the Temple would be visited again. With the capitol in the hands of the Republic, Luke Skywalker travelled to the ancient edifice in order to learn what he could of his lost heritage. Once Skywalker decided to revive the Order he invited one of his students, Tionne, to restore the Archives to their former glory and to add information from the Galactic Civil War. Star Wars Battlefront: Renegade Squadron

71
Did Darth Sidious and Vader ever discover how to cheat death?
10
What did Sidious ever teach Vader?
7
What became of the Jedi Temple's contents?

6
Why didn't Yoda & Obi-Wan stay around to help rebuild the Jedi Order?
8
How much official communication was there between the Senate and the Jedi Council?
10
Did anyone at LucasFilm acknowledge specific cases of borrowing from EU/Legends?
42
What exactly are the Jedi measuring in the Phantom Menace?
11
What are the implications of being “cut off from the Force”?
7
Where was Luke's Jedi Temple/Academy located?
13
A question about ownership of the Darksaber