When I was a kid, maybe 15-19 years ago but possibly more, my Dad printed off chapters of an online story for me. I can't remember much about it, or what it was called. I think the puzzles were beyond me at the time, but I'd like to find it and attempt them again.

This must be Planetarium.

Screenshot of the first puzzle: 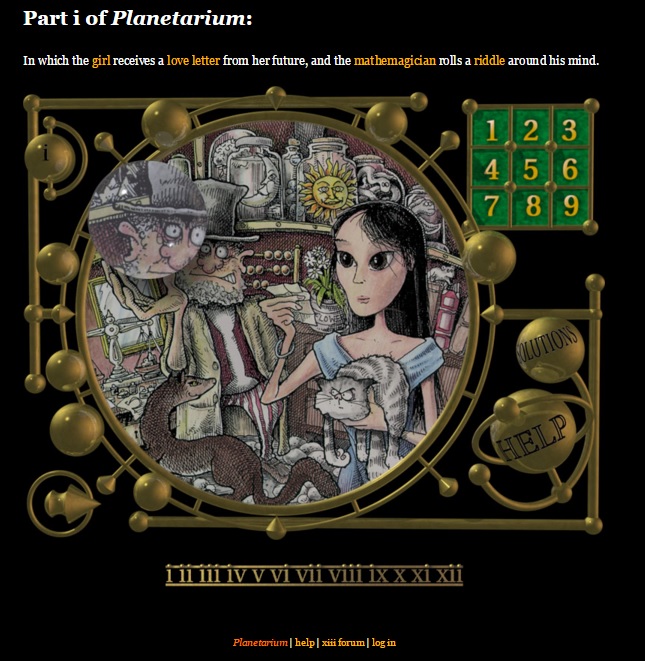 Note that you can even see the jars of things apparently suspended in formaldehyde.

Quoting from this review (emphasis mine):

Planetarium is a bit of surreality... I want to call it a fairy tale, but really it isn't. A girl (who can remember the future instead of the past) and a mathemagician (who achieves the same effect by the precision of his computations) set off on a journey. They are drawn by a mysterious love-letter that the girl received. We poor readers don't know who sent it. The girl and the mathemagician, however, with their different insights into fate... well, the story goes on.

Format? The story is divided into twelve chapters. Each part has a single illustration (hand-drawn by the author, Dave Whiteland) and several chunks of text, describing various things in the illustration. Click around to find out what's what. It's a typical hypertext exploratory mode, although less interactive than most computer games.

Planetarium is actually closer to the classic puzzle-books (Masquerade, Maze, the bee book) than to a computer game. It's a story with puzzles embedded in it; but you don't have to solve the puzzles to see the whole story. Puzzles are not barriers to advancement.

Instead, Planetarium paces itself by -- ahem -- clockwork. The first chapter is always available. However, to become involved, you must sign onto the web site (free registration). One week after you first sign on, part 2 becomes available to you. Every week thereafter, another part is made accessible, until you have all twelve. In the thirteenth week, you get to see the puzzle solutions, and the game tells you how well you did. That's it.

28
Short story about a girl who lost/replaced her personality
9
Looking for fantasy book about a boy who meets a tribal girl who turns out to be a shifter
19
Girl who can see the future meets boy who can see the future, relationship problems ensue
11
Short story or novella about a man who remembers everything
5
Book about three companions forced to solve puzzles to find gems
11
Sci-Fi/Fantasy Anime about a girl who turns into a world-destroyer
3
Online story about a girl with bug superpowers