Comic book with a boy and animals

I read this comic book as a child, but can't recall it's name & Google couldn't help. It's about a boy and lots of animals. As far as I can remember the boy regularly enters a dream-world, where he encounters a lot of different animals (can't remember what exactly he was doing there). His mother gives him a goldfish, which he names Moby Dick. This fish also enters the dream world. In my version the first two pages of the book contained a huge picture of different animals (whale, penguin & others).I read it in German, not sure if this was the original language or a translation. Anybody knows what I'm looking for?

This is Hé, Nic! Tu rêves? (Hey, Nick! Are You Dreaming?), the first book of a Belgian series about a boy named Nic and the adventures he has while dreaming. According to French WikiPedia, it was heavily inspried by Little Nemo. 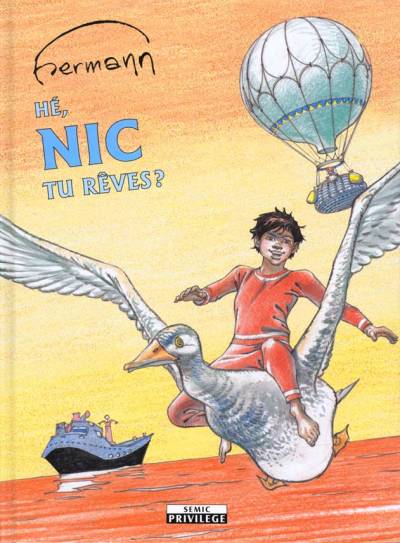 It was written by Morphée (Philippe Vandooren), drawn by Hermann (best known for Jeremiah) and colouring was done by Vittorio Leonardo. It was published by Dupuis.

It consists of a number of linked stories, each starting when Nic falls asleep. He dreams another chapter of his adventure, somewhat related to what he did before falling asleep. The major antagonist is Captain Bang, who wants to capture all the animals for his zoo. Nic tries to thwart his plans. When he succeeds, the captain gets so mad that he explodes with a bang. 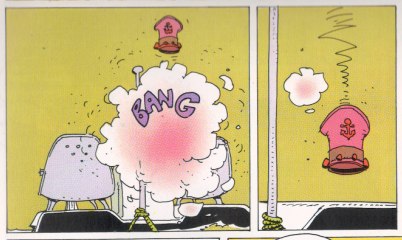 The German version is called He, Robin. Träumst Du? and is available on Amazon.de.

10
Book about a boy who travels to a parallel universe to get a book
8
Fantasy book series about a teenage boy who develops powers and can enter another world
13
Identify a story about a teen boy who learns to use magic with his lizard companion
14
Book about a boy and girl in proxy magical competition including a field of ice in a magical circus?
10
90's book about children climbing a tree and visiting different worlds from there
6
Book with angels as crows and anger as plant