Throughout the various Star Trek shows, there are a number of times when the Enterprise or another Federation vessel encounters a more advanced civilization. For instance, in The Corbomite Maneuver, Balok's ship seems to be more advanced than the Enterprise. Kirk and Balok arrange for a crewmember from the Enterprise to stay with Balok for a while.

In Star Trek: The Next Generation, in The Nth Degree, they meet the Cytherians, who are clearly advanced far beyond the Federation and there is talk of an exchange of technologies.

We know that the Federation has an understanding of the Romulan cloaking device and in the last episode of Star Trek: Voyager we know Captain Janeway goes back in time for a bootstrap operation to adapt future technology so the Voyager can make it home.

In both cases, though, the technology is either not used again or only used again with the supervision of the species who invented it.

Addendum: When I wrote this, I thought by specifying "the Federation," that would rule out what Voyager used, since we never really had a chance to see what new technology from the Voyager was actually adapted by the Federation after the ship and crew returned from their odyssey. I find it interesting so many examples come from that series, which kind of supports what I was thinking: The trope "Status Quo Is God" (Warning: TV Tropes link!) does come into play with Trek, at least in terms of existing technology. ST:VOY is an exception due to the nature of the series.

I'm still perusing answers and considered that I should rephrase this to specify that if it was just Voyager or only one ship or Captain, that it didn't count, since the intent was to find what tech the Federation used, but, after several answers included Voyager, I don't think it's fair to make that change now.

In Voyager "Hope and Fear", the crew believes that Starfleet has sent them a rescue vessel, the USS Dauntless, which contains a quantum slipstream drive. In reality, the ship was wholly from the Delta Quadrant and either built or acquired by a man named Arturis, who intended it as a trap for the Voyager crew. As such, the ship contained only "alien" technology.

They used the ship to travel 300 light years in an hour before the slipstream collapsed. They concluded the device would not be safe enough to use again.

However, the following year (2375), they were able to construct their own slipstream device, inspired by Arturis' drive. This was in "Timeless".

They used it to shave a decade off of their travel time.

In "Think Tank", Kurros even requests that Janeway give him the schematics for the slipstream device, as part of the payment for the Think Tank's assistance. 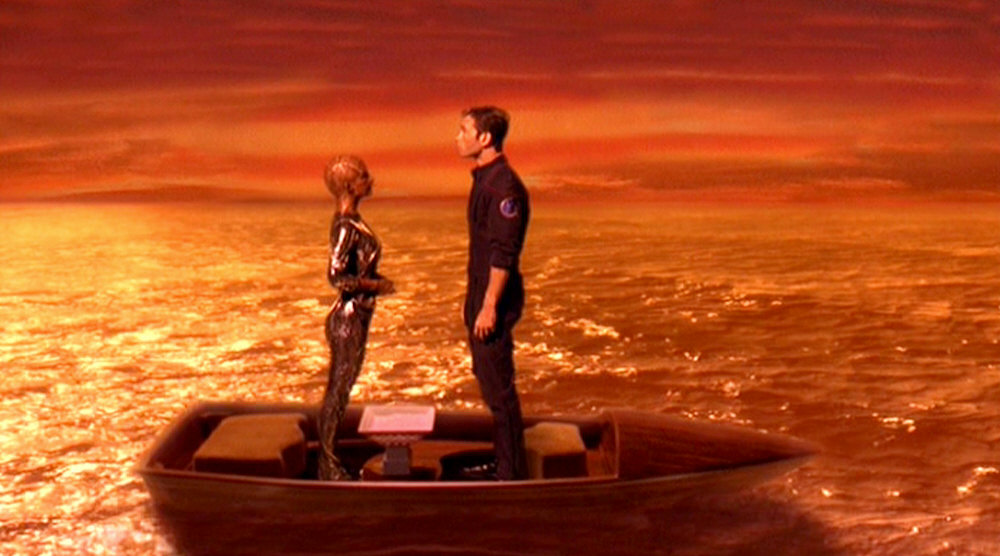 They parted on friendly terms, and gave Klingons the technology at the end of the episode. Although I don't recall it being explicitly stated, it's not a far stretch to say the Federation got at least some of the information from the Xyrillians.

It wasn't until over 200 years later (TNG, 2364) that they became a regular installation on Federation starships. Such a large gap could indicate difficulty in safely adapting alien technology for general use, which is why it typically only appears for one-off occurrences.

Pre-Federation, we know that the Andorians gave the humans technology. Both during the Xindi incident, where Commander Shran gives Commander Tucker some engineering technology, and sometime before the decommissioning of NX-01 they give them the technology to go warp 7.

Also, Chief O'Brien adapts a lot of Cardassian technology to work to Federation standards during his tenure at Deep Space 9. Self-sealing stembolts, for example, whatever they are.

Voyager received a large amount of alien technology, over time.

For starters, they have nanoprobe torpedoes that are a combined effort with the Borg.

Their power relays were also improved by the Borg, and after it was realized they worked better than before, were allowed to stay that way.

Their astrometrics was constructed with improved Borg sensors by Seven of Nine.

Perhaps slightly less canon, but the Vanguard books series goes into this specific point pretty thoroughly. These books are set in the TOS era aboard a large space station, from which the 'Taurus Reach' is explored.

Technology from a long-dormant society is discovered and eventually leads to an advance in energy-to-matter conversion, i.e. replicator technology. Also, several medical breakthroughs are done. This closes the tech-gap between TOS and TNG and we see these 'alien technologies' in action every time Picard orders a 'Tea, earl gray, hot'.

Not completely sure this counts, but how about disruptor technology?

Disruptors are weapons used in several different varieties by many alien species including the Borg, Breen, Cardassians, Cravic, Dominion, Eminians, Federation, Ferengi, Gorn, Hirogen, Klingons, Lokirrim, Lysians, Pralor, Remans, Rigelians, Romulans, Son'a, and Vidiians. But they have also been used by Starfleet - the Type 2 phaser has a disruptor-b setting, and subatomic disruptors and temporal disruptor bombs are used in the 29th century - although it's not clear which alien species they took the technology from.

Not strictly alien technology if alien means extraterrestrial: The mobile holographic projector the Doctor is equipped with in Voyager: Future's End is used continuously after this double episode.

Spoiler alert: After Starfleet blocked access to the wormhole, and the enemy dealt with that problem, communication with the wormhole's creators helped deal with the threat of new reinforcements coming in.

6
Have aliens contributed any technology to humanity?

34
Were there REALLY over 73,000 Federation starships commissioned?
6
Has there been any reference to the use of knowledge given from the Cytherians to the Enterprise-D?
9
Is it normal for Starfleet to provide replacement ships?
7
How old is the Cytherian civilisation?
17
Are any of Reginald Barclay's modifications permanent?
35
Has Starfleet Command or the Federation ever formally acknowledged the Q Continuum?
7
Longest journey by a Federation vessel?
4
Why would Captain Kirk even think a bluff like the Corbomite manuever would work?
2
Did Starfleet ever deploy ablative generators and/or transphasic torpedoes?