Was the design of the Peacekeepers inspired by the Stormtrooper design?

The Peacekeepers of The Hunger Games and the Stormtroopers of Star Wars have many similarities:

Has either Suzanne Collins or anyone associated with the films commented on the similarities?

Firstly, the Peacekeepers didn't always look quite so much like Stormtroopers. In the first film, their helmets didn't encase their whole heads nor have those one-way visors of black glass: 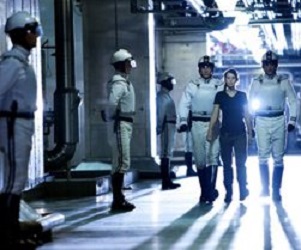 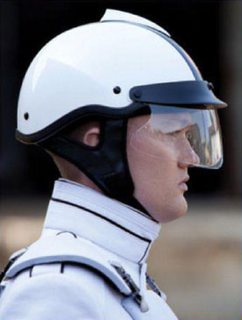 I found an article with a statement from the designer, Trish Somerville, that she was "inspired by insects, particularly the praying mantis", but makes no mention of the Star Wars Stormtroopers. It is sourced to this article and also backed up by this interview (thanks @Richard for the find!), where Summerville says:

I love the Peacekeepers that I did. I wanted to make them look a little more menacing, kind of insect-like. I draw a lot in my inspiration boards from different projects, a lot from nature, and animals, and insects. I just think that there’s so much there, in silhouettes and colors. The colors, they’re amazing, when you look in the insect world, and at in animals and nature. I wanted to make these Peacekeepers… after the first film, I felt like they needed to be bumped up a bit, because of what was going on in the second film with the rebellion that’s starting. I felt that we needed to show a transition, that the Capitol is stepping up its forces and making it much more intimidating and fearsome. So I went for this sort of spiny, praying mantis sort of look for them.

Not the answer you're looking for? Browse other questions tagged star-wars the-hunger-games inspiration stormtroopers design or ask your own question.