Where does Panem's electricity come from?

In this answer to my question about Panem's population, it is assumed that the only source of electricity is the coal that is mined from District 12. However, in the movies the rebels cut power to the Capital by blowing up a hydro-electric plant, implying that Panem has at least two sources of electricity.

Is there any canon information, aside from that scene, about where Panem's electricity actually comes from?

Coal ≠ energy. In an industrialized world coal has many uses, and energy is just one possible use. Coal is instrumental in the production of steel, one of the most used metal alloys on earth, and with Panem's military I bet we find it uses quite a lot of steel to support. Steel is also instrumental in large buildings that cities contain (think the capital).

While we don't have a confirmed location for District 12, it's most likely located along the northern part of the Appalachian Mountains, which puts it in a prime area to mine bituminous coal, which is the kind of coal used in industrial purposes and not in electricity production.

Other important uses of coal include alumina refineries, paper manufacturers, and the chemical and pharmaceutical industries. Several chemical products can be produced from the by-products of coal. Refined coal tar is used in the manufacture of chemicals, such as creosote oil, naphthalene, phenol, and benzene. Ammonia gas recovered from coke ovens is used to manufacture ammonia salts, nitric acid and agricultural fertilisers. Thousands of different products have coal or coal by-products as components: soap, aspirins, solvents, dyes, plastics and fibres, such as rayon and nylon.

Other than the large hydro-electric plant we see the rebels sabotage, it also has a solar plant named after President Snow, and seems to export its energy across the continent, which appears to be why District 12 (other side of the continent) has sporadically insufficient power.

Its also reasonable to assume that since district 13 had the knowledge and ability to create nuclear weapons, which is a far more indepth task then harnessing nuclear energy in a power plant, district 5 may also have been operating a number of nuclear power plants.

Some of this is referenced to thecaptiol.pn website hosted by lionsgate.

The Hunger Games Tribuite Guide, licensed by Lionsgate has this to say on district 5. 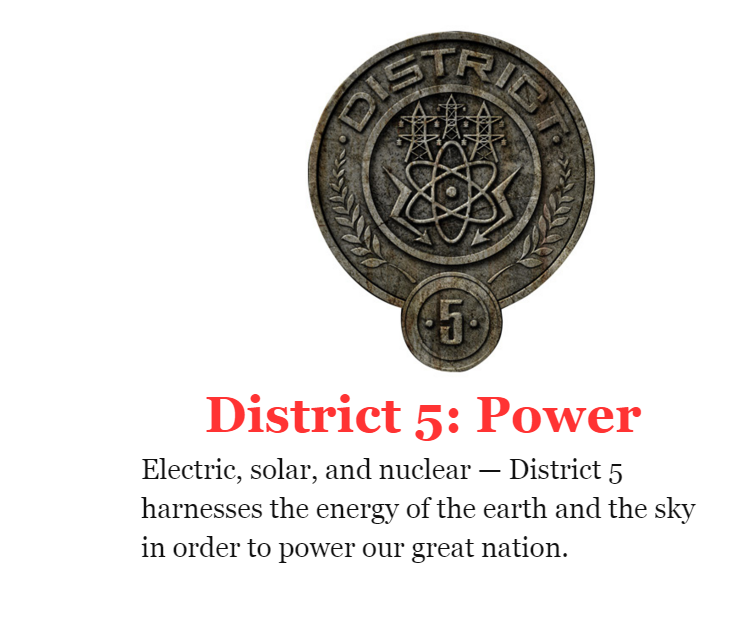 13
What is the population of Panem at the start of The Hunger Games series?

8
Do children from the Capitol participate in the Hunger Games?
23
Was Primrose exempt from future games?
15
Where is Plutarch Heavensbee originally from?
8
Where are the Arenas located?
9
Why does this character act as he does at the end of 'The Hunger Games - Mockingjay'?
14
Is the Three-fingered salute from The Hunger Games trilogy based on something from the real world?
13
What is the population of Panem at the start of The Hunger Games series?
8
Why couldn't tributes keep the food from the Launch Room?
5
Is President Snow sadistic or simply ruthless?
7
Where in the books does it say the first victor of District 12 was female?