In Star Wars: IV and Star Trek: III, are this guy and this guy the same guy?

In this answer to this question: 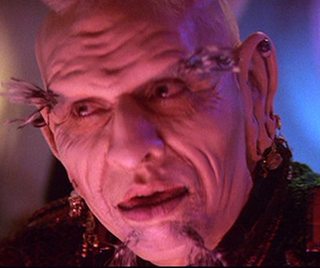 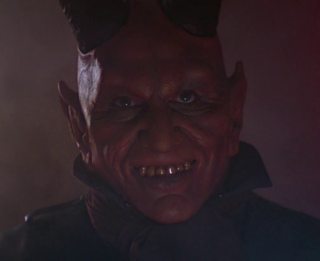 One from Star Wars IV: A New Hope, the other from Star Trek III: The Search for Spock.

Are these guys the same guy?

As user Nathan K. Campbell already pointed out, the alien from The Search for Spock, who McCoy tries to secure passage to Genesis through, is played by Allan Miller:

Miller's filmography does not include Star Wars Episode IV: A New Hope. Usually, IMDb filmographies include uncredited roles; that being said, these filmographies are not always complete or 100% accurate.

Turning to the character of Kardue'sai'Malloc (aka "Labria") in A New Hope, it is somewhat of a mystery as to who plays this "devil". It is widely known that he was inserted into the scene at the last minute, because costume designer Rick Baker happened to have a devil mask on hand that he liked.

I suspected that Baker himself may have played Kardue'sai'Malloc himself. In researching this, I stumbled upon the following old web page from the "Red 6" project (which is dedicated to compiling the character and actor names of everyone who has ever appeared on screen in Star Wars):

It asserts that Kardue'sai'Malloc was

For the record, Tippett played Doikk Na'ts in the Cantina band.

Miller's switch from TV to silver screen, and filming locations

According to Allan Miller's filmography linked above, he worked exclusively in television until 1977. His first credited film role was in MacArthur (1977) — interestingly, the same year as SW:IV. However, production on SW:IV was based at two studios (Elstree and Shepperton) in the UK, with filming locations in Tunisia, Guatemala, and Arizona.

the interior of the Mos Eisley scene was filmed at Elstree Studios in the UK. In the years 1976-1977, Allan Miller was filming various TV series in California as well as MacArthur on a Universal Studios lot in California.

Given his demanding TV schedule (appearances in several series at once), all in the Hollywood area, it seems very unlikely that Miller would have travelled to the UK to be part of the Cantina scene there. He also had no family or personal connections that would have brought him to the UK for other reasons.

Based on the information above, there is no evidence that the bar alien in ST:III and the Cantina devil in SW:IV are played by the same actor. Rather, the timing, locations, and anecdotes suggest that they were almost certainly played by different actors.

The actor in STIII is Alan Miller:

He does not appear to have a connection to Star Wars

The alien in the cantina is Kardue'sai'Malloc per Wookieepedia and was a played with an actor in a Rick Baker mask:

Here is a better picture in which you can see it is certainly a mask and bears little resemblance to Mr. Miller. 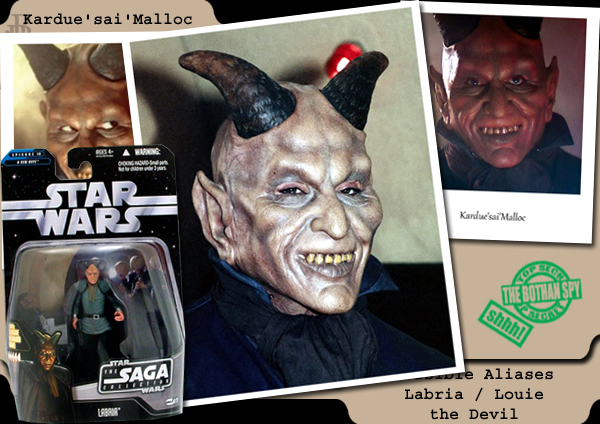 Note: Praxis addressed the following idea more coherently in his subsequent answer so be sure to check that answer as well if this is interesting / compelling reasoning:

It isn't unreasonable to think since SW was released in 1977 and STIII in 1984, the character design might have been an influence but it is almost certainly not the same person. Consider also that Miller is primarily an American actor and A New Hope was shot in the UK (of course there were American actors there - that isn't my point) - the point being that by all accounts this was a throwaway character added in at the last minute to give the scene more 'character'. It is unlikely it would have been a casting call type part and there is no indication that Miller was in the UK or Star Wars. 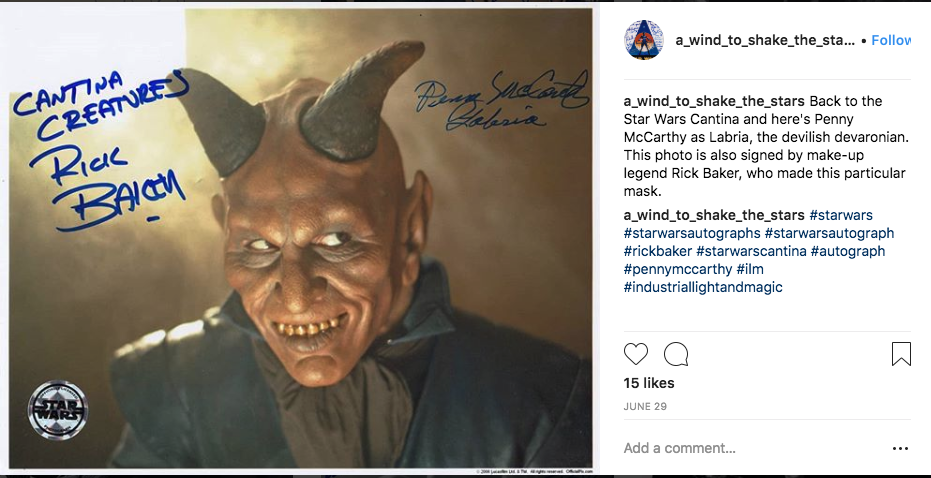 We already know that the Star Trek alien was played by Alan Miller, the real question is just who played Labria in Star Wars.

This is an interesting issue because no one really seems to know for absolute sure. Amongst the community of Star Wars BTS-uber-fans, the consensus is that it is most likely Rick Baker, as it was Baker's mask that was used, and Baker is known to have donned a few masks for various pickup shots in the Mos Eisley Cantina. But for some reason, no one has been able to verify whether or not Baker in that specific mask.

The most conclusive evidence we have is an old article about Baker, which includes a photo of him wearing the mask in question. 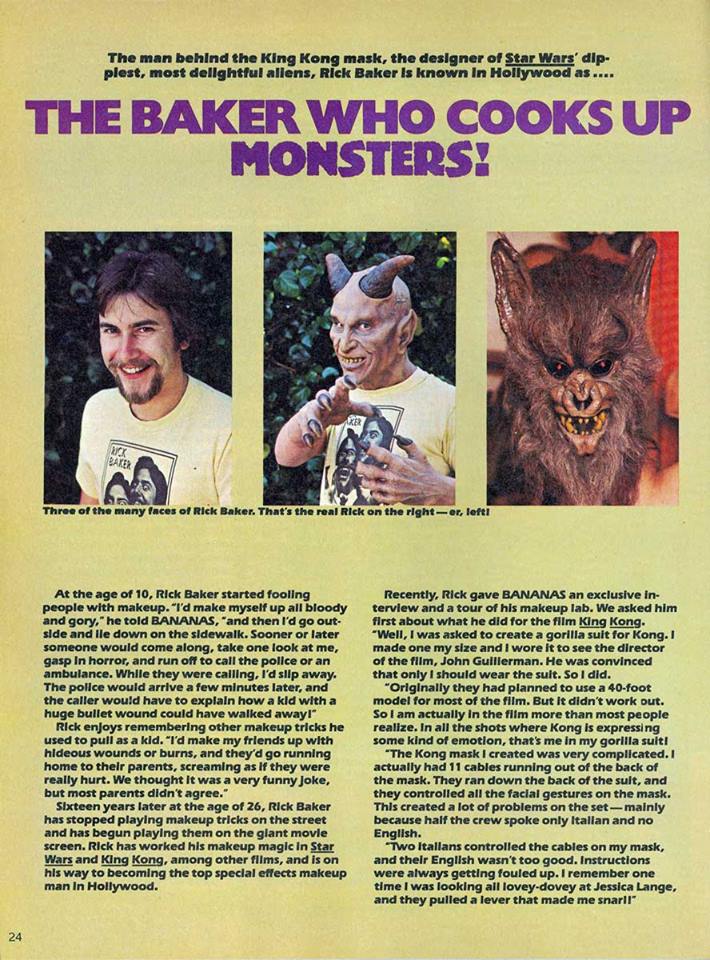 The eyes between Baker and the on-screen actor look similar, but it's pretty hard to say for certain, and the article doesn't mention him wearing it on-screen.

I asked about this in a Facebook Group whose membership includes not only extremely knowledgeable fans, but many people who worked on the films. In addition to the Rick Baker theory, a member related some information that they had found.

Apparently, at one point, Phil Tippett mentioned a part-time librarian at ILM named Jibralta Merrill being one of the faces behind the masks in the Cantina. Supposedly according to her, Penny McCarthy was the person wearing the Labria mask in the Cantina.

In a recent Joe Rogan episode:

Rick Baker the special effects/make up artist on Star Wars, mentioned that they had very little money and the Cantina aliens are just guys in various masks they had lying around, like "werewolf" and "devil"(this is the one we're talking about). Most likely: The same mask was re-used in another film. It's a common industry practice.
Share
Improve this answer
answered Nov 6 '19 at 22:04

Apparently, Kardue'sai'Malloc was portrayed by a lady called Penny McCarthy, who was an auditor at Lucasfilm or Fox.

She was at the 2018 London Film and Comic Con in the end of July and the billed image was the following: 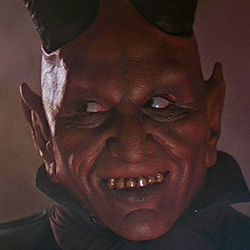 Not the answer you're looking for? Browse other questions tagged star-trek star-wars a-new-hope actor-identification the-search-for-spock or ask your own question.

77
Why are there humans in the Star Wars Universe?
15
Is there a pair of alien species, one in Star Wars, one in Star Trek, that are too similar for coincidence?
23
Which character in Star Trek has been played by the most actors?
8
Are Star Trek and Devil in the Dark related?
22
Why didn’t Lt. Saavik tell Kirk to bring Spock's body to Vulcan instead of leaving it on Genesis?
11
Are these three Star Trek characters all a result of the same “glitch”?