Why did this character name his son after Snape?

What are the reasons Harry included Severus in his son's name? After all those years of distrusting and being bullied by Snape, does Harry every give a reason, or does JKR ever expand on why in an interview or tweet?

Snape died for Harry out of love for Lily. Harry paid him tribute in forgiveness and gratitude.

In honouring Snape, Harry hoped in his heart that he too would be forgiven. The deaths at the Battle of Hogwarts would haunt Harry forever.

Snape didn't die for 'ideals'. He died in an attempt to expiate his own guilt. He could have broken cover at any time to save himself

but he chose not to tell Voldemort that the latter was making a fatal error in targeting Harry. Snape's silence ensured Harry's victory.

(The above is the text of 6 tweets from J.K. Rowling.)

His bravery and sacrifice for Harry's cause.

Why did you pick Snape to name Harry's kid after? I'm genuinely curious as he was nothing but abusive towards everyone.

Snape died for Harry out of Lily. Harry paid him tribute in forgiveness and gratitude.

Snape didn't die for 'ideals'. He died in an attempt to expatiate his own guilt. He could have broken cover at any time to save himself but he chose not to tell Voldemort that the latter was making a fatal error in targeting Harry. Snape's silence ensured victory.

That doesn't mitigate or excuse Snape's bullying of Harry, but when the war was over Harry understood the sacrifices and risks that Snape had taken. This was part of Harry's attempt to honour his memory – which also included having Snape's portrait hung in the headmaster's office.

In particular, she added:

"he died to save the wizarding world" What about Remus, Black, Dumbledore, Tonks, Fred, Mrs. Weasley Ron Hermione????

Harry chose to perpetuate the names of the two who had nobody in their families to do so.

And of course, we shouldn't forget the reason stated by Harry himself in the epilogue:

“Albus Severus,” Harry said quietly, so that nobody but Ginny could hear, and she was tactful enough to pretend to be waving to Rose, who was now on the train, “you were named for two headmasters of Hogwarts. One of them was a Slytherin and he was probably the bravest man I ever knew.”

JKR answered this in a series of tweets recently.

The gist is that it was out of honor and gratitude, but also that Harry felt remorse in how everything played out during the Battle of Hogwarts, and wanted to atone for his part in it. 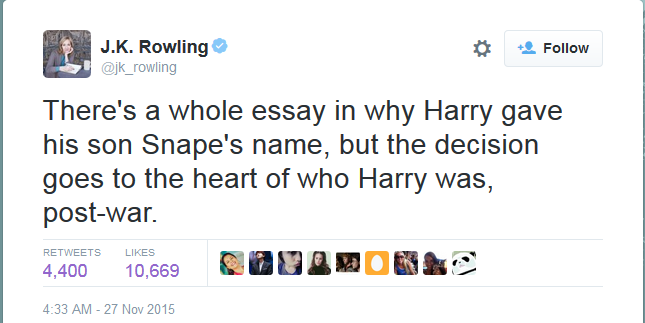 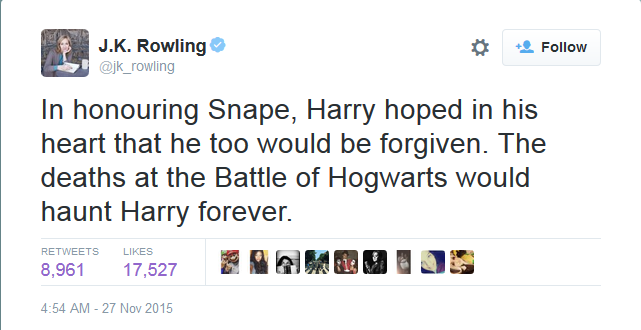 Harry says he "was a Slytherin and he was probably the bravest man I ever knew." Living under cover and under constant threat of exposure , he actually helped Harry numerous times despite his outward apparent loathing of him. Combined with the loyalty Snape showed to Lily, it seems reasonable that he would want to honor that.

Because Snape is one of the great people Harry was involved with. Yes, Snape caused trouble, but Harry came to know the truth after Snape's death:

Snape stuck up for Lily, Harry's mother, until and including his death. He thus took on the duties of godfather/stepfather for a child he loathed, of his free accord and only making Dumbledore a witness later. And this witness took his knowledge into the grave eventually.

At that time, again, he would have been completely free to drop his mission to a dead woman without anybody the wiser. And at that time he had come to dislike Harry personally with a vengeance from his exposure to him.

He stuck with his self-chosen mission and died completing it, saving the world as a side-effect.

There was no love lost on Severus Snape. But Harry decided to at least pay respect to someone who changed the course of the world out of a love that had failed changing himself in time for him to benefit from it.

Snape was a good person and saves Harry Potter from Lord Voldemort. After Harry found this out, he probably decides to do so in respect of him.

One thing that made a huge difference to the way Harry saw and related to Snape was that Snape shared his memories of Lily with Harry, through the use of the Pensieve in Dumbledore's office.

This would have been difficult for Snape as the memories of Lily were one of his most treasured possessions and the memories of Sirius Black and James Potter were his worst. On the other hand, for Harry these memories from Snape were a gift beyond measure of value as he had very limited memory of either of his parents.

Along with everything else that has already been stated here, this is just one more reason that Harry, despite their past differences and disagreements, ended up having such regard for Snape, and what he did for Harry and the wizarding world, that he named his son after Snape.

10
Was Snape romantically attracted to Mulciber?
12
What exactly did the Death Eaters Jr. do for Snape?
37
Is there a canon confirmation of why Dumbledore never gave Snape DADA teaching job?
75
Why would Dumbledore say “After all this time?” to Snape?
9
Were Snape's memories complete?
5
Why would Dumbledore ask Snape for something in exchange to saving the Potters?
43
Does JKR have a reason to call Severus Snape, Snape?