How long did this take in Heaven Sent?

how long was the iteration that the Doctor went through each time he sacrificed himself to make a new copy?

the total mass of all the skulls.

Summing up, we have a sum of at most half a day in the scenes we see in detail, a day and a half crawling from Room 12 to the teleport chamber, and at least several hours, maybe much more just wandering the castle, mapping it out, getting his bearings, eating, etc. Summing to a minimum of 2-3 days, but potentially a lot more.

As in the nice answer by Mike C. Ford, let's look at screenshots of the underwater skulls in order to get an estimate of how many iterations the Doctor must have been through by the time 7000 years have passed. Firstly: 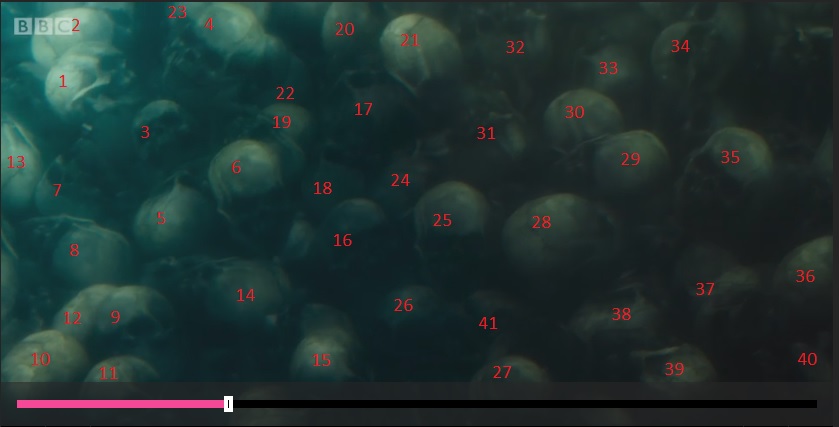 There are over 40 skulls in this shot. But we can do better! 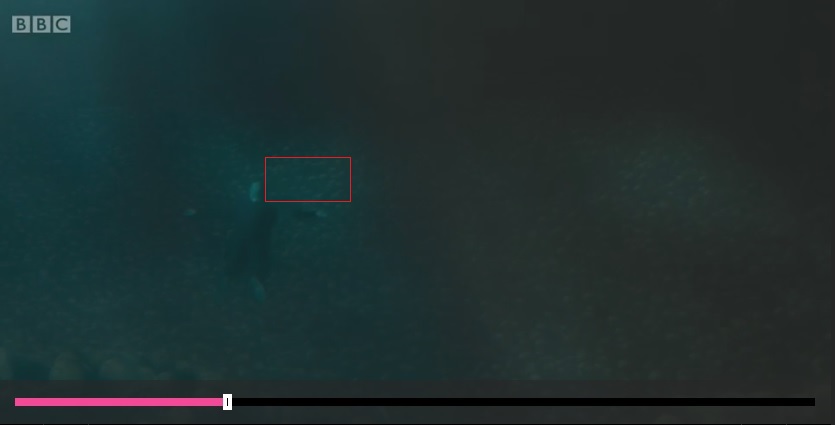 In this widepan shot from a few seconds later in the episode (around 14:30 on the iPlayer version available on the BBC website), we can see hundreds and hundreds of skulls. Within the red rectangle I've drawn, I estimate there are at least 20 skulls. This rectangle is around 1/60 of the screen, and we don't need to take account of perspective (foreground skulls being larger than background skulls) since the rectangle is roughly in the middle of the screen, front-to-back wise. That gives us an estimate of 1200 skulls (and probably many more).

Tl;dr At most 70 years, but probably less.

rand al'thor has done an irrefutably good job determining a lower bound for the time The Doctor was in the castle, so I will attempt to logically determine an upper bound.

In the iteration we initially see The Doctor in, he had been in the castle for 7000 years, based on the alignment of the stars. In the following iteration, he again says that the stars are aligned such that 7000 years have passed.

This then ensures that each iteration is less than 1000 years, as he would have observed that he was 8000 years in the future had that amount of time passed. This is the most certain answer that I can give.

However, we can then at least assume that it is also less than 500 years, as it is unlikely he would round up or down twice to the same number if they were 500 years apart (possible, but unlikely).

The only other evidence we have to see how long each iteration is, is by calculating how many iterations have passed. To calculate this, we can use the number skulls that he sees at the earliest point that they are seen underwater. It is unclear how many there are that we see after 7000 years have passed, but I would hazard a guess with at the very least 100 skulls.

There isn't really any way to calculate how long it took him to make the same revelations in the first iteration in order to leave clues for later versions of himself, but it will have taken him at the very least the same amount of time as the rest, so without further evidence we will just assume that it did.

This means that it took, at the very most, 70 years per iteration. This is possible, as with the age of The Doctor I'm sure that amount of time could pass and he wouldn't even bat an eyelid.

If there is a more accurate answer for how many skulls there were when he fell in the water the first time that we see him in the castle, that upper bound could come lower. It is likely that there more than 100, but for an absolute upper bound I chose the absolute minimum number that there could reasonably be.

12
Why are there dry clothes in the Heaven Sent castle? Why is Clara's painting old?