How long did it take to build Minas Tirith?

How long did it take the Númenóreans in exile to build the white city of Gondor and did they build it from the ground up or from the mountain behind it?

I'm going to answer your questions in reverse order.

Akallabeth answers your second question; Minas Tirith (which was originally named Minas Anor) was built at the feet of the pre-existing Mount Mindolluin (emphasis mine):

Isildur and Anárion were borne away southwards, and at the last they brought their ships up the Great River Anduin, that flows out of Rhovanion into the western sea in the Bay of Belfalas; and they established a realm in those lands that were after called Gondor, whereas the Northern Kingdom was named Arnor. Long before in the days of their power the mariners of Númenor had established a haven and strong places about the mouths of Anduin, in despite of Sauron in the Black Land that lay nigh upon the east. In the later days to this haven came only the Faithful of Númenor, and many therefore of the folk of the coastlands in that region were in whole or in part akin to the Elf-friends and the people of Elendil, and they welcomed his sons. The chief city of this southern realm was Osgiliath, through the midst of which the Great River flowed; and the Númenóreans built there a great bridge, upon which there were towers and houses of stone wonderful to behold, and tall ships came up out of the sea to the quays of the city. Other strong places they built also upon either hand: Minas Ithil, the Tower of the Rising Moon, eastward upon a shoulder of the Mountains of Shadow as a threat to Mordor; and to the westward Minas Anor, the Tower of the Setting Sun, at the feet of Mount Mindolluin, as a shield against the wild men of the dales.

A 1977 drawing by Tolkien further hints that Minas Anor was build from scratch, using the existing geography principally as a foundation: 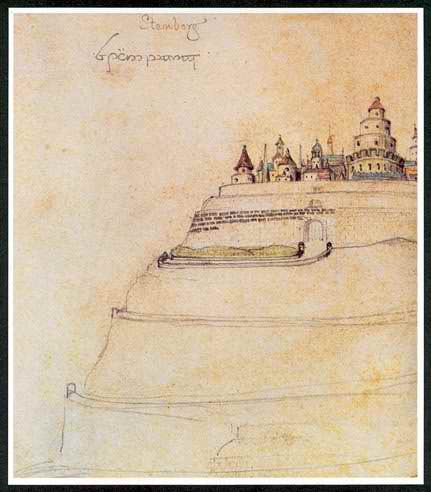 However this drawing is

So you may want to take it with a grain of salt.

The above quote also suggests that it was built in the same year that Isildur and Anárion landed after escaping from the downfall of Númenor; according to Appendix B, that was S.A. 3320. The implication, then, is that the city was built in a single year.

However, even if that assumption is incorrect (and, in fairness, I have no reason to suspect it is), we know that construction cannot have taken more than nine years; in S.A. 3329, Sauron unsuccessfully attacked Minas Anor:

However, note that the city wasn't built all in one go; there were two expansions recorded in Appendix B:

So, from a certain point of view, the Minas Tirith we're familiar with took 1912 years to be constructed, though that's probably not what the question was asking.

15
How Do the Catapults at Minas Tirith Work?
34
How long did Frodo and Sam take to reach Mount Doom?
20
When did Denethor first start to use the Palantir of Minas Tirith?
6
How did the Black Númenóreans self-identify?
30
Did Aragorn permanently ban Beregond from entering Minas Tirith?
37
Did the people of Minas Tirith know that Isildur had a living heir?
13
What is the flash of light from Minas Tirith?
2
How did the men of Gondor and Rohan communicate and join forces during the siege of Minas Tirith?
12
Why did Gondor build the tower, Cirith Ungol, near Shelob's lair?