Looking for a lower budget science fiction movie from the 1990s

I'm trying to find the name of a lower-budget science fiction film that was available for viewing on demands on MIT student cable in the late 1990s. I suspect the film was made earlier in that decade, and it definitely seemed to have been influenced by RoboCop.

The plot involves characters is a somewhat dystopian near future. One of the characters (named Hawkins, I think) is initially in a wheelchair, and that is interfering with his relationship with the woman he loves. (He watches virtual reality simulations of himself having sex with her when he's alone at home.) Maybe halfway through the movie, he decides there's no hope for their relationship, so he lets the bad guys turn him into a RoboCop-like cyborg. I think he ends up fighting the other main characters, but I don't remember how the movie ends.

The film was clearly shot cheaply but competently. The color palette was rather drab, I think, and there were few indoor sets. It's possible that the film never got a normal release of any kind, since I don't know where the students at MIT cable got ahold of it.

So does anybody know what this film was?

I'm going to guess this might be the 1992 film, Prototype. 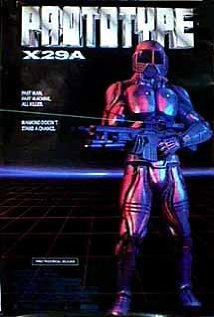 Set in a post-apocalyptic Los Angeles of 2057, Hawkins Coselow, a crippled soldier, along with his ex-lover, Chandra Kerkorian, share vivid psychosexual dreams. Dr. Alexis Zalazny, who is working on a cybernetic program that will help him walk again. The program sort of works, but everything goes deadly wrong when the man becomes a killing machine that can interface with any computer. He ends up killing several people belonging to a resistance movement.