Searching for a book I heard mentioned in the Stuff You Should Know podcast (How the Grimm Brothers Worked). They didn't enunciate very clearly, so all I could pick up was that it was recent, by an author whose last name was (or sounded like) "Lloyd" (and may be female), it was a series of three books set in an Oregon forest with a fantastical theme which set it apart from other recent books.

... is a 2011 children's fantasy novel by The Decemberists' singer-songwriter Colin Meloy, illustrated by his wife Carson Ellis. The 541 page novel, inspired by classic fantasy novels and folk tales, is the story of two seventh-graders who are drawn into a hidden, magical forest, while trying to rescue a baby kidnapped by crows. They get caught up in an epic struggle, and learn of their connection to a magical parallel world while confronting adult authorities who are often cowardly or dishonest. The natural beauty and local color of Portland, Oregon figure prominently in the book."

Recent book, last name sounds kind of like Lloyd and set in an Oregon forest. There's only one book so far, but Meloy plans to write more when he has time away from his band, and the plot is apparently explicitly divided into three parts. With 541 pages, that's pretty close to a compiled trilogy right there.

Could it be Griffin's Calling by N. R. Rose?

When troubled teen Griffin Dominic finds himself searching for something more in life, he discovers it in the most unimaginable way. Frustrated by unfeeling parents, Griffin is drawn to friend and father figure John, who is teaching him the skill of using a bow and arrow. But will this knowledge be enough to protect him when he is confronted by threatening creatures? And when presented with the challenge of a lifetime, will Griffin have the strength to respond?

Let's look at your criteria one by one:

by an author whose last name was (or sounded like) "Lloyd"

Doesn't match this (unless you have a weird accent!)

(and may be female),

I can't find a first name for the author, but she is female: 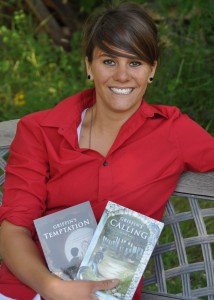 it was a series of three books

set in an Oregon forest

Its setting is in Oakridge, Oregon.

with a fantastical theme

20
Trying to remember the name of a female, Canadian, children's sci-fi author from the 80s
6
Young adult or children's book about creatures from a parallel dimension?
25
I'm looking for a Sci-Fi book with a female protagonist who doesn't wear logos
9
Young adult fantasy trilogy with a large symbol and coloured background
11
Young adult trilogy about antarctic laboratory and old Gods
13
Identifying young-adult fantasy trilogy