Why were there so many orcs without armor at the Battle of Helm's Deep?

Related to this question but I feel it is a separate question.

It seems very tactically unsound to have the orcs that are raised with the ladders to have no breastplates. In addition (see image) the torch bearing orc is also not wearing much armor.

This seems in contradiction to Gimli's quote earlier:

These are fighting Uruk-hai. Their armor is thick, and their shields broad.

So is this just another Peter Jackson problem, or was the armor ever described in the books? 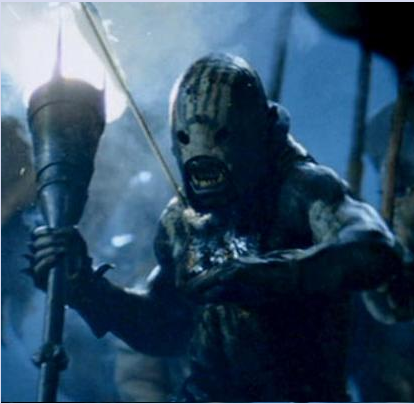 Those are a special type of Orcish soldier, called berserkers

According to Weta Workshop, who made the props for the films and used to sell a Berserker statue, the Berserkers were primarily a psychological weapon (emphasis mine):

Of all the divisions of Saruman's vast Uruk-hai army to lay siege to Helm's Deep, the Berserkers were perhaps the most terrifying. Painted with the emblem of their lord, shaved bald and blood-smeared, these crazed warriors, largest of the Uruk-hai, wore no armour of any sort. Not expected to live, their sole purpose was to break and strike terror into the enemy lines, buying time for their armoured comrades to gain the walls of the fortress. 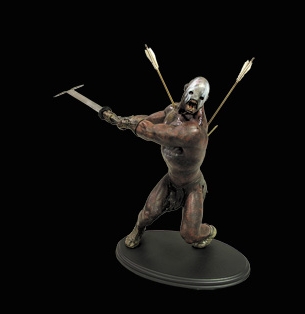 Although sending your warrior in without armour is a very good way of getting them killed, the idea is that the experience of a screaming, naked Uruk charging at you with a two-handed scimitar is going to leave some nasty mental scars. Their enemy thus thoroughly shaken, the (better-armoured) orcs will have an easier time of it.

Although these guys are inventions of the films, they aren't unreasonable additions; shock tactics have a storied history in warfare, and the Orcish berserkers are almost certainly modeled off the Old Norse berserkers, who (allegedly) went crazed and unclad into battle:

[Odin's] men rushed forwards without armour, were as mad as dogs or wolves, bit their shields, and were strong as bears or wild oxen, and killed people at a blow, but neither fire nor iron told upon them. This was called Berserkergang

In addition to the superb answer from Jason Baker.

From a tactical and logistical point of view, it would be foolish to waste armour on Orcs that are pretty much guaranteed to die due to the role they have been given.

First up the ladder will die in pretty short order, but will occupy those on the wall long enough for the better armoured behind to get up and start getting a foothold.

The same with the torch bearing Orc, the size of the fuse on the bomb is not going to give him time to light it and retreat to a safe distance, he is going to blow up and take any armour he is wearing with him.

52
How could Saruman lose the battle of Helm's Deep?