How did the Kents raise a super-baby?

I have seem plenty of questions and posts about how could Superman (with all his powers) deal with XYZ, more or less having his Superpowers in the way of everyday routine for a normal human.

Probably one of the most famous would be "Man of Steel, Woman of Kleenex" which explains the problems Superman, due to his biology and superpowers, would face in a situation where one (mostly) loses control of processes that are not completely controllable take place. If I recall correctly, this is even explicitly mentioned in Superman Earth One.

Anyone in care of a baby or toddler knows that at times babies or toddlers can be quite physical. At least, they are very physically demanding for parents! They are not yet able to communicate effectively, and thus their frustration may manifest not only by screaming, but by more physical behavior when they are upset (which can be quite often, even if it is for short periods of time). They might mistreat their toys, throw stuff away, resist to be hold, bathed, fed, changed, put to bed, etc.

We have several alternate Supermen (Movies or cartoons, different lines of comics, etc.) but what seems to be "canon" is that Superman is rescued as a baby by the Kent and even at that sort age he is exhibiting some of his superhuman abilities. Depending on the storyline these abilities might show or increase over time, but other seem to be there from the very moment he is exposed to the yellow sun.

Comics, by nature, expect some degree of suspension of disbelief. Nevertheless, Superman's strength seems to be there when he is a baby, and I can't imagine the Kents having to deal with a baby who is much stronger than any adult, presumably much faster (if he wants to escape a diaper change or bath time) and who knows what else.

Is it ever addressed, in any canon, how Jonathan and Martha Kent deal with a super-baby?

The short answer seems to be "very carefully".

In the oldest serials, Clark's naughtiness seems to be limited to lifting and moving objects as well as using his super-speed. While this certainly presents a challenge for his parents, his good nature and age (he's usually depicted as being at least 1 year old) take the edge off the more obvious difficulties a parent might face

In more recent serials, more thought seems to have been given to the difficulties a human might have in raising an alien. 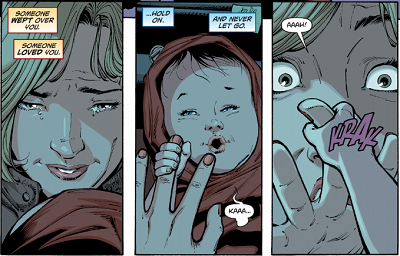 The Kents were extraordinary parents, mature, kind, and live in a remote rural area. They are used to deal with large animals (cows and horses) that are stronger than humans, and have survived, so, it is not hard to believe that they have techniques to cope with a very strong baby.

Besides, in most canon comics about the infance of Superman, he only uses his powers on stress life or death situations, not for the common farm work. Being "good" by nature and nurture, baby Superman have to be a very easy and well behaved kid. In the picture you illustrate your question yo can see he is a 4 or 5 years old kid, not a baby, and Kents are discovering his strenght. Probably he was a very normal baby until then, and then mature enough to control his character to not harm anybody.

This isn't much, but it is a reference.

Jonathan: I stopped by to see Eric's parents this morning.
Clark: How are they?
Jonathan: They're scared, Clark.
Clark: Were you ever scared of me?
Jonathan: Well, you threw a few temper tantrums when you were little. We had some holes in the walls, but... nah. You were a good kid, Clark.

So, temper tantrums weren't too big of a deal, to them, because Clark was "good".

I've thought about it, and Clark has advanced intelligence. Even at his young age, I'm sure he was more advanced than normal human children. I believe this could have aided them in managing the child. Normally, you can't effectively reason with young children, even though it seems they can understand. However, there are methods of handling the troublesome issues of young children. As they grow older, reasoning with them does help, and they begin to understand their actions can have an effect on others. I'm guessing Clark reached this age a little earlier than my own children.

While there were at least 78 appearances of Superbaby, primarily in Action Comics, Superboy, and other early titles, they don't seem to really address issues with raising the baby. Some of these appearances were actually when adult Superman was transformed into a baby. It's hard to draw any good information from them.

There may be other off-hand mentions of raising Clark, in comics of television, but I'm guessing there as hard to find as the quote from Smallville above. It was pure chance I happened to remember that line (and honestly, no others) from Smallville. We're really only left with our suppositions, based on what we know of child-rearing, the Kents' personalities, and Clark's disposition.

I'll have to find it, so someone please remind me, but there is a scripted essay by Elliot S. Maggin, I believe.

Martha Kent is dying, and relating her memories, half asleep and barely aware that Clark is by her bedside. She tells how Clark, even as a child, was unusually in tune with his surroundings, somehow understanding that things were way weaker than him, especially people. He got upset, had a bit of a tantrum and struck the well, shattering it, but he ran at Martha and stopped himself, saying "No...never hurt mommy." He was supposedly only 3 at the time.

It's available online, it will just take time to search for. Someone please remind me and I'll see about putting up the link to it after going through my folders.

26
Are all Kryptonian objects “super” under a yellow sun?

19
How have Superman comics dealt with the Man of Steel, Woman of Kleenex problem?
19
In “Man of Steel”, how did Superman get his super-suit?
12
How come the Green kryptonite didn't kill baby Clark on the way to Smallville?
14
Have Lex Luthor and the Riddler ever tested their intellects against each other?
8
How long has Batman been “The World's Greatest Detective”?
8
Has Superman ever willingly revealed his identity to Lex Luthor?