Pre-1995 movie which involved being stuck on a futuristic island

Back in about 1995, I remember watching a movie with some older kids. The movie was on late and before the movie ended, I had to leave and go to bed.

I never saw the end of the movie and have no idea what it was called.

From memory, the movie involved being stuck on a futuristic island and needing to leave. The main guy had met an inventor while there who was trying to build a boat or plane or something like that to help them get away.

The movie was on TV I think so I presume it probably had a release date of 1994 or earlier.

I think you are talking about the truly awesome Escape from Absolom / No Escape movie (1994). 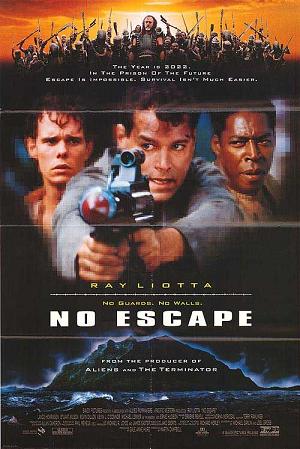 This involved an island of prisoners split into two groups (roughly speaking, goodies and baddies). The main character John Robbins is a combat expert.

One of the "goodies" is an inventor who tries to make a boat to avoid the guards radar to escape the island.

6
TV show I think, where Aliens are leaving Earth, most people on Earth don't know that they are on Earth
7
Movie where aliens/monsters electrocute people
8
What animated movie had reptilian aliens attacking a city surrounded by a force field?
1
Title of a movie I watched around 2004~2006: Earth was destroyed and rebuilt, protagonist kills mice
14
YA novel involving immortality via drowning
5
Trying to find an old animated / anime movie with massive sized dragons in it
5
80s/90s zombie(?) movie with a “stolen record” of a shower scene