Why wasn't Clara displaced by the Weeping Angel?

In the Doctor Who episode The Time of the Doctor, Clara has her ankle grabbed by a Weeping Angel covered in snow. She is not displaced in time as is the usual result. She gets free of the Angel, no harm done. 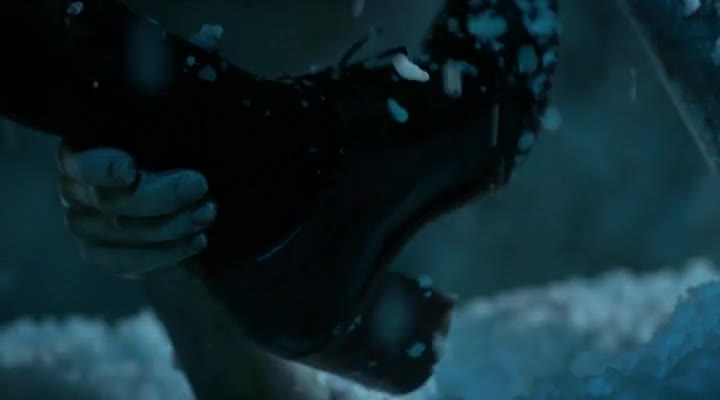 How is this possible? It usually takes one brief touch for the Angel's power to cause you to disappear. The episodes Blink and The Angels Take Manhattan being two prime examples. In the latter, Amy was gone in an instant (I only highlight/mention this example, because like Clara, Amy was also a companion).

Keep in mind: The Angel under the snow only moved when not being observed (even though its face and eyes were covered up). And there are other angels who appear on the scene, so there is no issue with normal Quantum Locking rules. Another thing to consider is her clothes are holographic in this scene (for the Church of the Papal Mainframe), so the Angel would actually be touching her skin. Just to shut down those possible non-explanations.

The time displacement effect of a Weeping Angel is not automatic. It's, for lack of a better word, a "feeding mechanism" they use. As Ten explains in "Blink", the angel sends you back in time, then somehow feeds off the potential future you might have had that you no longer will.

However, they don't automatically do that to you when you make contact with them. In "The Time of Angels", Eleven explains that the Angels on board the Byzantium were well-fed, and so had no need or desire to send people back in time. They were trying to kill the invaders outright. Similarly, in "Angels Take Manhattan", River gets trapped in the grip of an Angel, but wasn't sent back in time, merely held there until she escaped.

It's unlikely that the Angel that grabbed Clara was interested in eating; it was there to fight a war against The Doctor. Sending his companion back in time to feed off her time energy wouldn't really have achieved much, but trapping his companion (if they could have kept hold of her) would give them leverage against him.

DOCTOR: Clara, step away from it!
(The hand grabs her ankle.)
DOCTOR: Clara, keep looking at it. Don't look away. Don't even blink!
CLARA: What is it?
DOCTOR: There is a Weeping Angel under the snow. It looks like a statue, isn't a statue. Can you get your foot out?
CLARA: Only if I get it out of my shoe.
DOCTOR: You're not wearing a shoe.
CLARA: Good point.

As holograms aren't physical objects (it is projected to the visual cortex of the viewer), touching it didn't work (I don't think Weeping Angels could even see it). Touching works when skin or wearable solid objects are in direct contact.

The Weeping Angel touched the space/air around Clara's leg, which doesn't work for them.

Update:
I just watched that scene (1:45) again and this is the correct answer. Doctor was just trying to look at the hand saying Clara to step away from it and then Clara turned around. So, before Angel could touch Clara's skin (she was naked), either The Doctor or Clara saw it.

Update 2:
Let's say, the Angel really touched Clara's ankle (and, Clara didn't get time-warped due to whatever reason), Clara could have never been able to free her leg without breaking it. But, we saw later that Clara never had trouble with her leg which turns the hypothesis wrong. Proof by Contradiction: The Weeping Angel never touched Clara's skin.

8
What exactly happens when a Weeping Angel is quantum locked?
46
Is it possible to kill a Weeping Angel?
9
Why does the Doctor drive a car when he can take the Tardis?
3
Freezing a Weeping Angel at long range
7
Why didn't The Doctor just stare at the angel to save Amy?
10
Why can the TARDIS go back to the Doctor in "Blink"?
5
Did Caitlin Blackwood appear in "The Time of the Doctor"?