What was the original design of the Daleks?

Considered to be one of the greatest science fiction villains the Daleks are generally considered to be Dr Who's primary adversary.
What was the original design of these mechanical monsters?

For some background of in-universe Dalek origins look at this question.
The Dalek concept was created by long time Dr Who writer Terry Nation (Aug 8, 1930 - Mar 9, 1997; aged 66).

When Doctor Who began, its creators had a remit to include an element of learning. Loosely speaking, the show was designed to alternate between historical stories, and futuristic stories in which the story hinged on scientific concepts and discussed cultural differences with aliens. The first ever Doctor Who story saw the time-travelers visit primitive humans, and their second adventure took them to the futuristic world of Skaro, an idea submitted by a television writer called Terry Nation. He was formally commissioned to write his story on 31st July 1963.

The time-travelers discover a metallic animal in the forest called a Magnadon which the Doctor deduces has evolved to hold its similarly metallic prey in a magnetic field. A city is then discovered, built by more metallic creatures, called Daleks.

The Magnadon was a bizarre life form that arose in the aftermath of the war between the Thals and Daleks on Skaro. A metallic creature, its body was held together by a magnetic field.

The Dalek Design and Build
The designer originally assigned to this serial was Ridley Scott, yes that Ridley Scott.

The designer originally assigned to this serial was Ridley Scott, who would later make a name for himself as a director of films such as Bladerunner, Alien and Gladiator. When his availability fell through, another BBC employee called Raymond Cusick was assigned.

Cusick collaborated with various people to iron out the practicalities of these props. They had to be large enough to accommodate an operator but still remain compact. A louver section in the neck was necessary to allow the operators to see, and propulsion by tricycle was discussed but proved impractical. Cusick recalls that his original idea was to have a smooth, cylindrical skirt but he steered away from this in the mistaken belief that the props would be constructed from timber and so he ensured the design of lower half of the Dalek was angular.

One of the key men who helped realise the Daleks was Bill Roberts, the man behind Shawcraft Models. The BBC outsourced Doctor Who work to Shawcraft because their own internal visual effects department couldnŌĆÖt handle the load. Since Shawcraft lacked the carpentry staff, the Daleks were constructed mainly from fibreglass, but Cusick learnt of this too late to reinstate his original desire for a cylindrical skirt.

Bill Roberts and another shot of him leaning on a Dalek 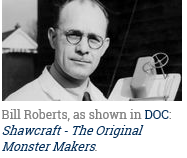 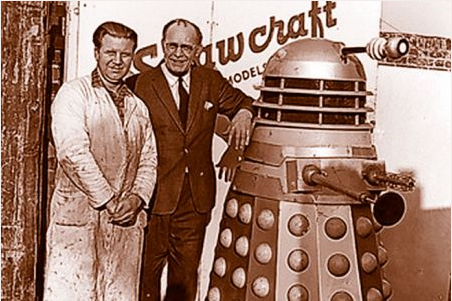 ShawcraftŌĆÖs contribution to the final design can never truly be measured but Ray Cusick acknowledges Bill Roberts put his own ingenuity into the creation of the props, such as suggesting the inclusion of a cameraŌĆÖs diaphragm shutter to act as an eye. Cusick alleges that it was during one of their lunches together that a pepper pot was supposedly used to illustrate to Roberts how the Daleks should look when in motion.

... based on Ray CusickŌĆÖs interview (2008) on the BBC DVD release of The Chase, however, Cusick also claims in The Early Years to have had the same infamous lunch using pepper pots with director Chris[topher] Barry and Mervyn Pinfield. 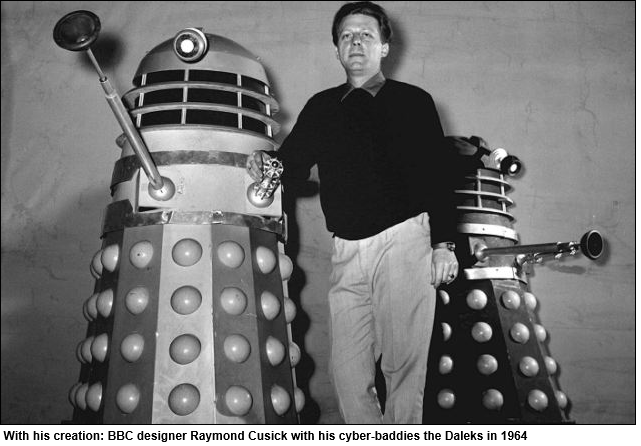 What purport to be the oldest available plans of a Dalek are credited to draftsman A. Webb based on CusickŌĆÖs outlines. These plans are headed ŌĆ£Zero 20th NovŌĆØ which would have been the deadline for the project and they are dated 27/10/63. 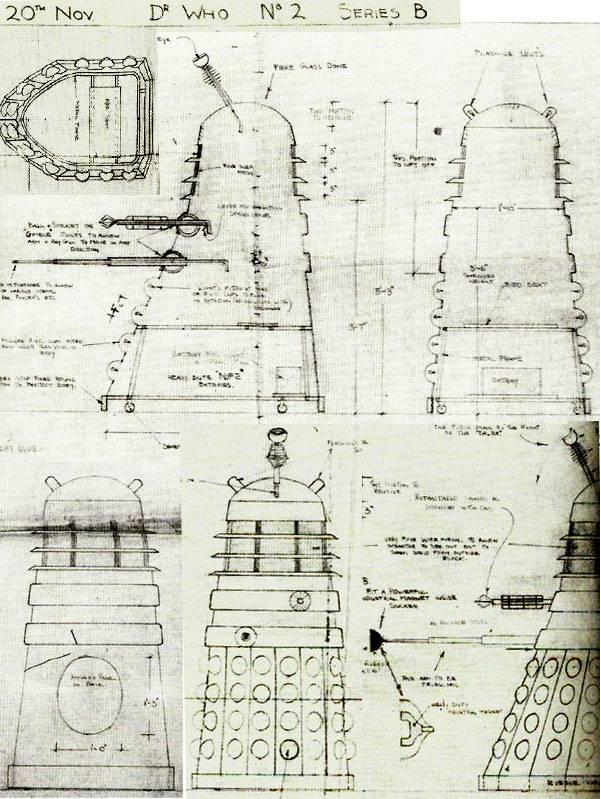 A number of sketches exist which allegedly portray rejected ideas for Dalek designs, but the true nature of these drawings is somewhat suspect. Three Daleks of wholly contrasting styles exist including a see-through Dalek featuring a tricycle inside ŌĆō the origin of which is not thought to be Ray CusickŌĆÖs own pen which makes it impossible to be certain it has value as a historic source.

The props were robustly built and finished by Shawcraft to a high standard, costing less than ┬Ż1000 in total. At a glance, the props all looked identical in their pristine livery of silver, grey and blue. The collars were of smooth, highly-reflective metal and the hemispheres were painted a very light sky-blue. The eye stalks were adorned with nine discs and the guns were intricately crafted from metal rails and perspex octagons. The fenders were coated in cut segments of black carpet underlay which would have not only helped muffle the sound of their wheels in studio, but also dampened the gentle sounds of collision as the props bumped against each other on set. Each of the four Daleks was numbered, which can be seen expressed using one, two, three or four horizontal dashes on their rear between the collars. 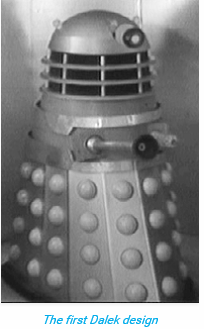 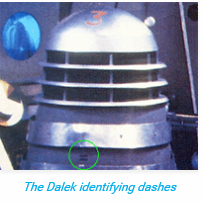 Dalek OneŌĆśs key feature is that the collar beneath the gunboxes is noticeably thinner than its counterparts and there is a slight lift at the front. Dalek Two is harder to spot at a glance. A keen eye will note however that the lower front collar is fractionally broader than its upper collar and the hole for the gunŌĆÖs ball-joint is smaller than the arm-hole. Dalek Three has several unique features which make it easy to identify. Beneath the gun and arm box there should be two screws holding the lower collar in place, but for some reason Dalek Three lacks these fixings. Unlike the first two props, the neck cageŌĆÖs vertical rods are chamfered at the top. Another difference is that the screw at the very front of the top collar is at its extreme lower edge, whereas the other props have their screw mounted centrally. Dalek Four is less identifiable. It has sloping neck-rods like Dalek Three and it has a bolt in the rear skirt panel like Dalek One however this one is painted over and appears paler. One noticeable feature is that the gun and armŌĆÖs ball-joints protrude more than usual. 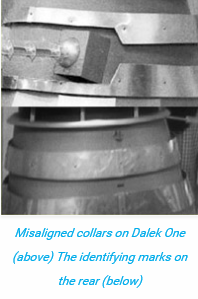 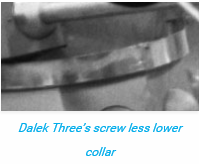 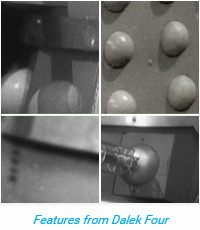 4
When Were the Daleks Created?