Has Superman ever gotten sick?

The Man of Steel has many well-documented super abilities as we all know. Discounting any effect by Kryptonite, has Superman ever gotten ill?
I'd prefer comic depictions, but any format will do.

No, 'love sick' does not count.

The comic opens with a car being driven south along I-55. Clark Kent is driving the car, and it looks like he has seen better days. He is feverish, sweat is poring down his face, and he hasn't shaved in days. He is apparently hallucinating as well, causing the car to swerve along the highway. On the passenger seat next to him is a rock with a small red fungus growing on it. The Man of Steel is sick and dying. He hallucinates back to the events that started this.

He and Lana are at a news conference. A scientist, Dr. Everett, is displaying the same rock that is in Superman's car, and it is revealed to be a meteorite and the fungus growing on it is extraterrestrial. While such a find would be monumental in the real world, in the DC Universe contact with aliens is commonplace, and this isn't a big event. Clark scans the fungus with his telescopic vision, and from a magnified level, the fungus looks like a scarlet jungle. He quickly recognizes this fungus as being from Krypton. It is the Bloodmorel, which used to grow in the scarlet jungles of Krypton, a fungus that prefers to grow in blood, causing fever, hallucinations, overexertion, and in 92% of cases, death.

The very next day, Clark experienced his first bout of incapacitation when he got a paper cut. His invulnerability returned, but then he lost his X-Ray vision. With his powers cutting in and out, that night he started to hallucinate. Realizing he's been infected, he borrows the meteor rock from Dr. Everett so that he can examine it. Unfortunately his microscopic vision cuts out on him, preventing any analysis. He realizes then that he is probably going to die, and wants to die alone. So he buys a secondhand car and starts driving south, which brings us back to the present. 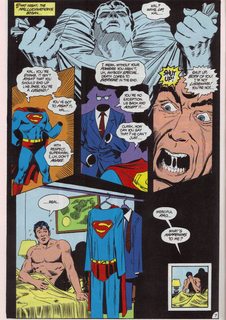 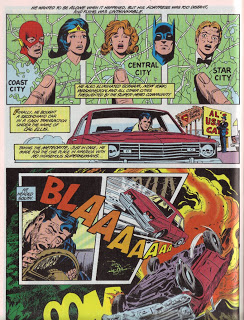 Another example (not comics this time): in the film Superman IV: the Quest for Peace, he is suffering from radiation sickness after receiving a scratch from Nuclear Man's radioactive claws. See this video (thanks @WadCheber for the find):

To complement Rand's excellent answer, from TV (Lois and Clark), Superman, being a Kryptonian, is succeptible to Kryptonian viruses, and in "Home Is Where the Hurt Is" (Season 3, Episode 11)

.. Mindy Church, who is now the head of Intergang ... plans to kill Superman using a virus from Krypton. Superman gets sick and Lois asks her father's help. Sam explains that the only cure will be if Superman gets very close to death since that way the virus will die too. The treatment is successful and Superman gets well... (Wiki episode summary)

This is likely (not certain) based on Virux X from the comics:

When Superman actually does contract Virus X, in a serialized tale in Action Comics #363–#366 (1968), his skin turns green and mummifies. Fortunately, his funeral pyre, the sun, is his salvation, as its radiation kills the virus. 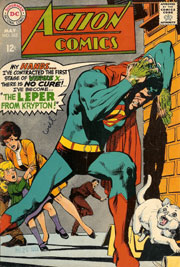 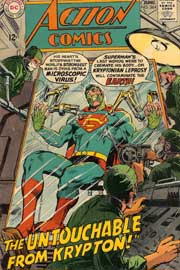 9
Can Supergirl get sick?

19
How have Superman comics dealt with the Man of Steel, Woman of Kleenex problem?
10
Was Smallville (the show) ever considered canon in the DC universe
13
Does Batman/Bruce Wayne have a quintessential “love of his life”?
23
Is Batman's Kryptonite ring enough to stop Superman if he ever went rogue?
41
Has Superman ever said, “Ouch!”?
1
Does having the codex inside him make superman strong in Man of Steel?
4
Did Superman ever regain his memories of his Legion adventures with Supergirl?