How did Kirk manage to get Captaincy of the Enterprise despite just graduating from Academy?

Unless I completely misunderstood the timeline, Star Trek (2009) has the following happen to Kirk:

This is fully explained in the film's official novelisation and subsequent (canon) comic serial #13. Simply put, Kirk was granted the full captaincy for two main reasons:

“Your inspirational valor and supreme dedication to your comrades are in keeping with the highest traditions of service and reflect utmost credit upon yourself, your crew, and the Federation. By Starfleet Order Two-eight-four fifty-five, you are hereby directed to report to commanding officer of U.S.S. Enterprise for assignment as his relief.”
...
Pike was the one who smiled. “I am relieved,” he responded quietly. Then he too lapsed into procedural formality as he opened the box that was resting on his lap. Inside was a medal; its composition distinctive, the words engraved on it memorable.
“And as fleet admiral, in acknowledgment of your…unique solution to the simulation, it’s my honor to award you with this commendation for original thinking.” 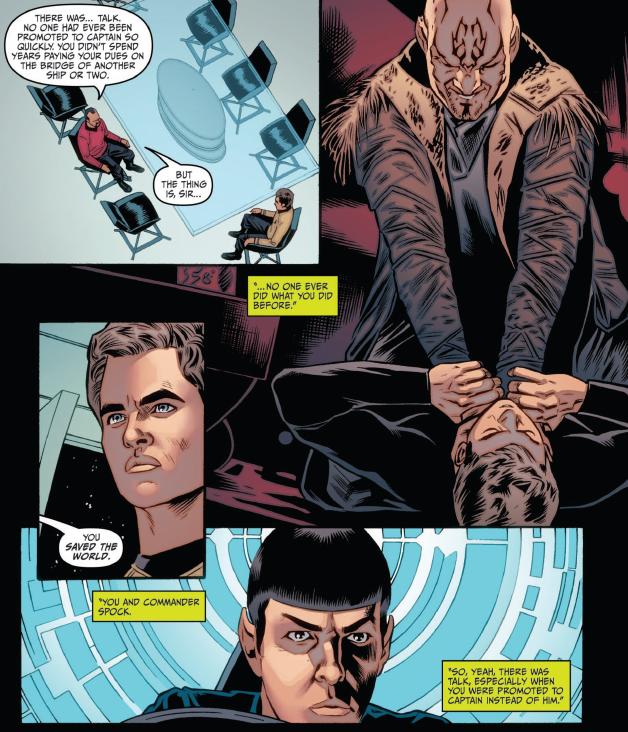 Unfortunately, there is no way to correlate this plot contrivance to any real world logic.

Assuming the nuTrek Enterprise has the same 430 crew compliment as the classic Enterprise (and it's a larger ship, so it may be higher) there are literally hundreds of people in the chain of command who come before a stowaway cadet.

Kirk would never have had a chance to "prove" anything or "justify" Pike's initial decision to put him in the chain of command at all. He should have spent the entire film in the brig. Once the movie was over, he should be in prison, not in command of a starship.

There isn't a good answer. It makes no sense. It is completely absurd. Yes, he saved the Federation. But so what? You give him a medal for that. You build him a statue. You name a bridge after him. You don't make him captain of the Enterprise!

The Enterprise is NOT a warship. That is not its primary mission. The captain of the Enterprise has to be more diplomat than warrior, and Kirk 2009 is completely unsuited for that role. Plus, there are only a few thousand other people, far more qualified for the job, and who have spent years rising up through the ranks, who are going to be really pissed off that they were passed over for the job in favor of a cadet.

Audie Murphy was the most decorated American combat soldier of World War II. After winning the Medal of Honor, they didn't make him a General and give him his own army. He got promoted from Sergeant to Lieutenant! You can be a fine warrior with great instincts, but that doesn't mean you are good at anything else!

Kirk should have been rewarded with his own ship, but he gets a small "starter" ship where he can learn what it takes to be a captain and how to command men. (Hint: it takes more than unwavering testicular fortitude in the face of doom!) Because of his heroics, he is fast tracked. He gets progressively bigger ships over the next few years, and he also leaves the fleet a few times to serve in diplomatic positions on Earth and other planets. Finally, the day comes when he gets a starship, and everyone agrees he is the best man for the job.

That's a believable outcome. In the subsequent movie, Kirk is still screwing up big time, violating the prime directive, etc., which confirms that he has absolutely no business being captain of anything. At least that had a believable outcome, when he got demoted to first officer.

Because Starfleet made a mistake.

Kirk's actions against Nero show courage and enterprise and all that good stuff, which goes a long way towards saying he could be a good Captain, in the future, once he's accrued lots of shipboard experience. But not yet.

Indeed, the very beginning of the next film shows that it was a terrible decision with huge repercussions, and his position as starship captain was stripped from him because of it.

The answer is he saved the federation. It's really as simple as that. He shows ingenuity and can think outside the box. A starship captain needs to know how to follow orders yes, but just as importantly needs to know how to assess the situation and adjust on the spot. This has historically in all canons been why Kirk is considered one of the greatest star fleet captains ever.

I know I'm late to the party but;

In short, the movie skipped over everything that would've explained why he was promoted, beyond the whole 'he saved the world' thing.

This made me curious so I searched for the youngest US Navy captain, which turned out to be Stephen Decatur, the parallels are amusing. Part of the reason he rose so fast was because his father was a famous naval officer.

Stephen Decatur began his naval career in 1797 and his first command was in 1802. Kirk joined starfleet academy in 2255 and took command in 2258 so Kirk has the jump by about two years. Also, Decatur's command was not the flagship of the fleet, although it was oddly enough also named USS Enterprise. Furthermore, Decatur didn't actually reach the rank of captain until 1804 (losing to Kirk by about 4 years).

So it would indeed seem that Kirk's rise in the new universe is quite unprecedented. Also, I don't know if anyone has mentioned this but in the old universe Kirk didn't assume command until 13 years after joining the academy so the new universe did indeed shorten things considerably. However, to be fair, Stephen Decatur didn't save an entire planet, he just performed well at his duty and had an influential father.

There is nothing that matches this to the original series. The original series mentioned that Kirk was the youngest in Starfleet to have make rank of captain. Trick is they also mention that he was 32ish at the time he got the promotion after serving on several other ships in his career. I guess when you have time distortions you can then do anything you want with the past, ugh.

This is somewhat of a trope in certain genre's, and certainly has some background in Sci-Fi as well; there is one specific "Chosen One" who can ascend quickly through the ranks where others can not.

It happens in Starship Troopers to some degree, with Johnny Rico. However, in that case it is also due to attrition; all the superior officers keep getting killed.

It happens in Ender's Game, where Ender Wiggin ends up defeating an entire civilization while other recruits have had more experience but are not given the chance.

It happens in Star Wars, as noted in RedCaio's comment under the question. It even happens in movies like Scarface, although that's far from Sci-Fi.

I don't think the movie is really trying to recreate reality, but lend to the "legend" that is Captain James T. Kirk. By showing him as someone who can essentially lead a Federation ship in only one day, you're basically saying, "This guy is well above average. He's a one-percent kind of guy".

9
What rank was Kirk when he first boarded the Enterprise in Star Trek (2009)?

9
What rank was Kirk when he first boarded the Enterprise in Star Trek (2009)?
19
How effective is the Kobayashi Maru as a training exercise when everyone knows it is an unbeatable scenario?
23
Why was there a 20-year gap between Enterprises C and D?
31
How would Starfleet know what a Romulan looks like in Star Trek 2009?
7
Robert April in the alternate timeline
28
Why did Spock Prime suggest Kirk take command of the USS Enterprise from young Spock?
4
How old was Peter Preston when he entered Starfleet Academy?
15
Did Kirk's captaincy of the Enterprise have a canon starting date in TOS?
36
Was Spock the First Vulcan in Starfleet?