When did The Watcher violate his oath to defend his home world?

Uatu is well-known for violating his oath of non-interference, most famously in Fantastic Four #48, but I remember a comic where a group of alien invaders set up weapons right next to the Watcher saying that they knew he would not interfere with their plans of conquest and destruction on the planet. Presently, and with a simple wave, he wipes them out saying what they didn't know was that the planet was his home world. What was that comic? 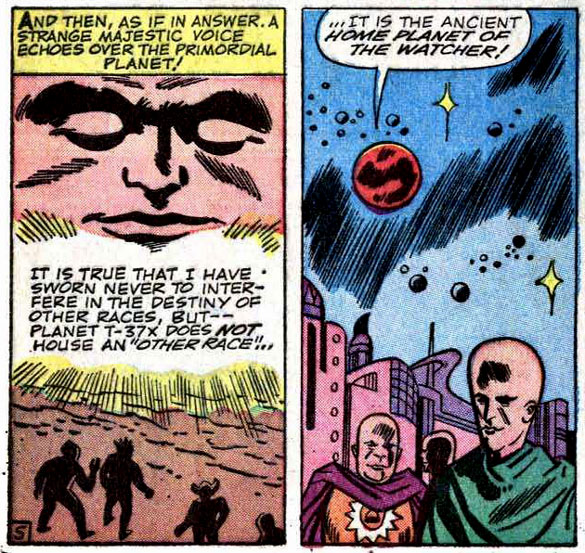 At the time, Tales of Suspense usually had 3 stories, with the third being "Tales of the Watcher".

Here is a synopsis:

The Watcher was on a moon orbiting planet T-37X when he was spotted by a band of roving space pirates out to loot a world's natural resources. After determining T-37X contained large quantities of gold and uranium, they settled down on the moon to build a delta-ray cannon that would force the world to surrender. They incorrectly figured the Watcher would not intervene. Instead, Uatu disabled the cannon and banished the marauders to a distant world. He explained to the stunned looters that while his oath prevented him from interfering with other races, he was, however, free to act in the defense of his own, revealing that T-37X is the ancient home planet of the Watchers.

12
When/How did Wolverine learn about his past?
16
Book about a world of women where a man crash lands trying to find his way home?
3
When did Weapon X give Wolverine his adamantium?
64
Is Stan Lee playing the Watcher in all his cameos?
8
When did Spider-Man lose his under-arm webbing?
16
When did Spider-Man acquire his powers?
16
Story with student test to find a new world and bring back navigation data, teacher tried to persuade students to go native
30
Young man discovers his home “world” is a spaceship
10
When did this character prepare the stuff in Spider-Man: Far From Home?