In ST:VOY why didn't fluidic space collapse into a black hole?

I've been thinking about this question for many years, and today I came upon this amazing question, Why didn't fluidic space crush Voyager?.

Part of the accepted answer is:

It is safe to assume there are similar physical forces such as gravitybold added, since their technology, while alien, seemed quite functional and effective in our Universe. This implies Species 8472 must be familiar with the properties and cosmological constants of our Universe if they are different than their own.

If the fluid fills the entire universe, then there is no region of significantly greater density for it to collapse upon. There is a uniform gravitational force pulling toward any and every part of the universe, but these all cancel one another, so in the end there is no net force.Jason Patterson

Can we say why didn't fluidic space collapse into itself eons ago? 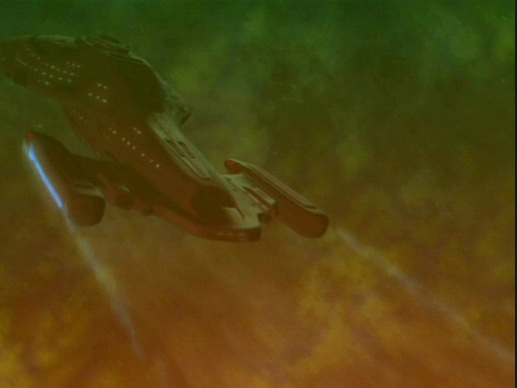 The (as yet unclear real world) repulsive effects of Dark Energy may be another perfectly acceptable solution.
If this problem is deemed a duplicate/speculation I'll remove it.

In Voyager it is never explained what the fluidic space actually is. Is it normal space filled with a fluid? Or is it a strange kind of space time that behaves like a fluid.

Since we left the boundaries of our observable universe, it doesn't necessarily mean that our laws of physics govern fluidic space too.

Equal density of fluid with our laws of physics however seems to be a poor solution - that didn't really work in our universe - which directly after the big bang was filled with gas (which ultimately behaves much like a fluid). A small disturbance could ultimately create a local distortion that would in the end cause density shifts and thus create gravitational pull towards one point. This is actually one of the basic star forming mechanisms in our universe. A shockwave from a super nova explosion or similar causes gas clouds that were perfectly stable before that event to collapse in on itself and create new stars.

The existence of species 8472 alone is a hint that equidistribution of fluid within the space can't be true, because they themselves are an anomaly in the equal distribution - let alone their evolutionary path.

The only physical explanation of fluidic space would be that it is governed by different laws of physics - which is actually a possibility since fluidic space isn't within our own space time.

In the Star Trek universe, we've encountered forces and races capable of manipulating (or straight-up negating) Newtonian physics as we know it. One possible scenario could be that fluidic space is little more than a Q's ant-farm.

Not the answer you're looking for? Browse other questions tagged star-trek star-trek-voyager physics or ask your own question.

6
Does being pulled into a black hole always cause time travel?
9
Revelation Space - Why didn't the ship get trashed when Volyova put it into reverse?
4
In ST:Voy, 3:21 “Before and After,” why would Kes go back in time in spurts?
19
Why didn't fluidic space crush Voyager?
4
Can destruction of the black hole restore original timeline?
14
Interstellar — Black hole manipulation?
6
Is Fluidic Space a parallel universe or another dimension (or something else)?
3
Why didn't Voyager use fluidic space to get home?