Has there ever been a depiction or scene of inside a Babylon 5 Shadow Vessel?

Babylon 5 introduces the Shadow, one of the most mysterious and sinister villains in the genre, together with their deadly warcraft.
Have we ever seen inside one of these terrifying vessels?

An in canon description will suffice if there was none. 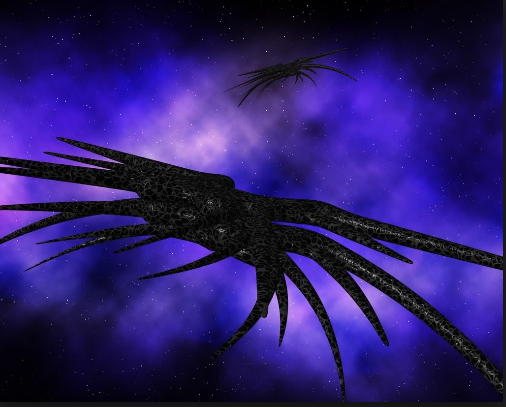 Kinda yes, kinda no. It's important to understand that while the vessels used by the Vorlons and the Shadows extrude into realspace, the two races are in fact perfectly capable of assuming a non-corporeal aspect. It would appear likely that within the confines of their own ships, they don't take on physical form and it's certainly possible the the ships themselves aren't hollow.

We do see inside a Shadow vessel (kinda) on at least one occasion, when Michael Garibaldi's ship is captured. As you can see, it's simply embedded into the ship itself which has flowed around him. 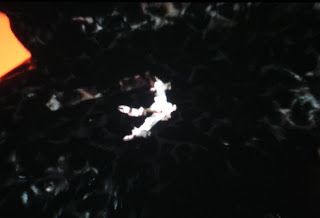 If you're willing to look outside the TV show, yes.

The inside of a Shadow ship is described in The Passing of the Techno-Mages trilogy. Honestly, there's not much to it. It is a more biological construct even though it's engineered, and the inside "skin" is the same appearance as the outside of the ship. There is only an outer dock/airlock area and an inner cabin. The cabin space is only one room and exists solely to house a vat of liquid that functions as the pilots chair. That liquid is what the cyborg pilots (like Anna) are lowered into, and it serves the dual purpose of connecting their wetware and thoughts to the rest of the ship systems and cushioning them against high-impact maneuvers. While acting as a shuttle (something that is resented, by the way), ships can push out their internal skin to create chairs, benches, minor accomodations like that.

Presumably there's more to it, as even a massive biological construct would not consist entirely of black goop, but they don't get into how it's built or grown. In response to the comment discussion about whether actual Shadows ride-along, it's possible with the small cabin area, but seemingly not necessary. There is also the matter of acting as a cargo transport, both ferrying Anna's smaller transport and Garibaldi's fighter at different points. The entry to the inner cabin seems to be a kind of airlock system, one outer door, and one inner door, and that outer area in between is large enough for small ships to enter.

In one episode they capture garibaldi's starfury and carry it off, in another episode it shows a shadow vessel with what looks like the outline of a human inside with their arms outstretched on either side, it's a pity someone doesn't make a fan film showing the first ones at the beginning, like maybe called babylon 5 the first age of mankind, then maybe a sequel showing the shadow war from 1,000 years before as we saw glimpses of that from the babylon 5 series, but valen would have to be played by a new actor

It is not a depiction of the inside but it proves there was an inside. BABYLON 5 comic #6 On Alien Soil depicts a dozen shadow allies coming from a shadow fighter ship. (not Drahk but the shadows originally had more allies - all creepy- before just focusing on the Drahk)

The big shadow ships could spit out a dozen of these fighters.

Vir was depicted on a mission to destroy a second Shadow planet killer. I don't recall if he went into it - I thought he did. Centauri trilogy book Armies of Light and Dark. (In my opinion as far fetched as that may have been it was vastly better than the awful out of continuity hack writing of Jeanne Cavelos and her ruining of the technology story)

Also when the shadows went beyond the rim they must have been on the ships.

21
Has J. Michael Straczynski ever revealed the meanings of names in Babylon 5?