Did Superman Ever Meet His Parents or See What Krypton was Really Like?

I know that Kara and Jor-El died when Krypton blew up, but in at least one version of Superman (the movie, Superman, from the 1970s or early 1980s), Superman did manage a form of time travel.

Did Superman ever end up, through time travel or projection, or any other means, on Krypton so he was able to see what life was like there before the planet was endangered? Did he ever meet Jor-El and Kara or was there any way they ever had an idea of what became of him?

Yes he did, through time travel in Superman #141

In a three part story, Superman travels back in time while chasing a planet-sized creature that is approaching our solar system. He flies fast enough to not only break the time barrier but also end up on Krypton before it exploded.

While there he watches his parents get married, helps his father round up an escaped zoo creature, and falls in love with an actress named Lyla Lerrol.

He is accidentally rocketed off Krypton and ends up near a yellow sun. Regaining his powers he realizes that if he goes back to Krypton he would simply lose them again and he wouldn't be able to save everyone. Realizing that fate can't be changed he uses his returned powers to instead break through the time barrier again and return to earth.

At the least he has seen Kandor due to it being miniaturized and being it's safe keeper.

Superman was also miniaturized and inserted into Krypton so he was able to interact with Kryptonians in a Kryptonian city.

Since Kandor was a major city of Krypton it would have been a useful representation of many parts of Krypton culture.

Superboy met Jor-El in the story where Jor-El visits Earth. I believe Jor-El was studying in some sort of time-stretch bubble for an exam. A comet passed by and transported Jor-El forward in time to where the Earth was. Superboy tried to change the past and told Jor-El of Krypton's doom. As proof, Superboy gave some Red-K to take back to Krypton. Unfortunately, when Jor-El got back the effect of the Red-K was to cause amnesia. 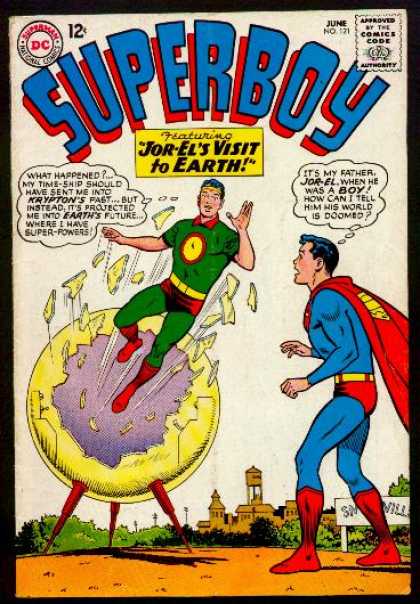 I have an old comic book (soft cover, magazine size) here he finds a device which can collects light so he can see the history of his race (and especially his family). He travels through space to the places where he can collect the light of the past (say 1000 light years from Krypton to see 1000 years into the past) and watches. This is muted, of course, but he reads their lips.

The golden age superman (Or Earth 2 Superman) first learned of his Kryptonian heritage by traveling back through time to find out why a little piece of rock should hurt him. (His first encounter with Kryptonite in the comics) In the case of Earth 1 Superman had Super-Recall (I guess that would be like Eidetic memory?) where he could recall his early life on Krypton (About 2 years). As well, he at different points both traveled to krypton through time travel or learned about the history through other survivors, such as the people in the bottle city of Kandor. This version was probably the most familiar with Krypton's history and culture than any other version. After the Crisis on Infinite Earths rebooted continuity, Superman was now the only survivor, and could no longer time travel, so he only learned about Krypton through other sources. He first learned of his heritage when a hologram of Jor-El appeared, beaming Krypton's history into his mind. At one point Brainiac created a false Krypton with an entirely different history (Similar to Earth 1's) to trap Superman, but Superman figured it out and escaped. The mythology was later rebooted again so that Supergirl, Krypto, and other survivors could be brought back to the mythos. He never time traveled to it, but he was able to learn it's history though other survivors. Since everything has since been rebooted again, he has traveled through time to Krypton, and has learned about it as well through Supergirl and other sources.

About forty years ago I purchased a superman comic which depicted him finding his parents in suspended sleep in a space craft. He awakens them but due to an incurable disease they must return to the suspended sleep. Before that happens they get to meet and know each other. It was printed on the issue that it would never be reprinted and I lost my copy through the years, but never forgot it.

Check out the following: SUPERMAN SILVER AGE SUNDAYS HC VOL 01 that covers adventures from 1959 through to 1963.

There is a 1962 story, "Greatest Feats", where Superman time travels into Earth's past and appears to change history. He seems to then succeeds in saving Jor-El and Lara only for him to meet them on Earth with the baby Kal-El. It turns out, however, that although he did change history he travelled to a parallel universe.

There are is at least one other instance: I recall one story where Superman goes back to Krypton and it appears Jor-El and Lara have some dark secrets. However, the family name is restored to honour when it turns out they were working under cover and trying to infiltrate some illegal organisation. This was a story I read in the early 1960's and may have been in a Superman Giant Special (possible image provided). Whether this proves to be the story in Superman #141 mentioned above I'm not sure. 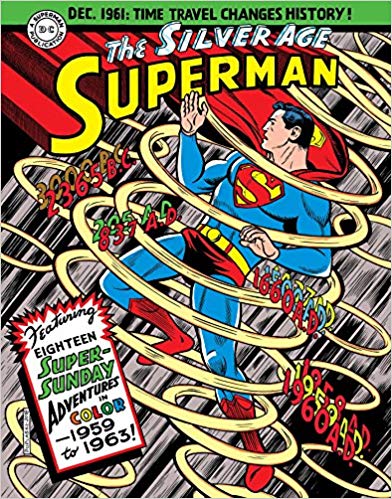 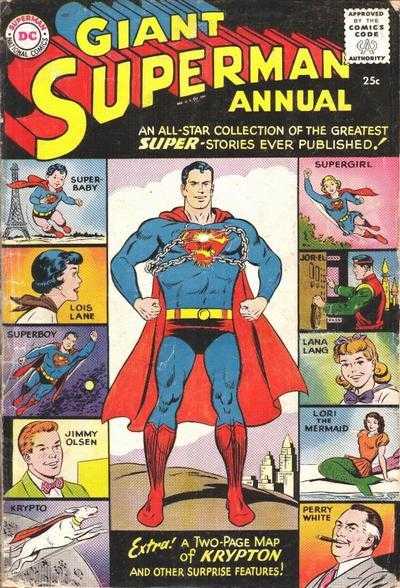 Yes, in the World of Krypton limited series:

9
Did Mandrake the Magician physically fly or levitate prior to Superman's first flight?
3
What did Adventures of Superman use from the comics and what was later added from the series?
9
Why doesn't Superman make his own Flashpoint paradox to save Krypton?
6
Did Superman ever regain his memories of his Legion adventures with Supergirl?
8
What happened to Silver Age Superman?
10
Superman comic book with an alien villain who was frozen and dumped in deep space, rather than being executed