Has the ultimate destiny of Galactus ever been revealed?

[...] it is my destiny to one day give back to the universe infinitely more than I have ever taken from it.

Has this statement ever been explained? 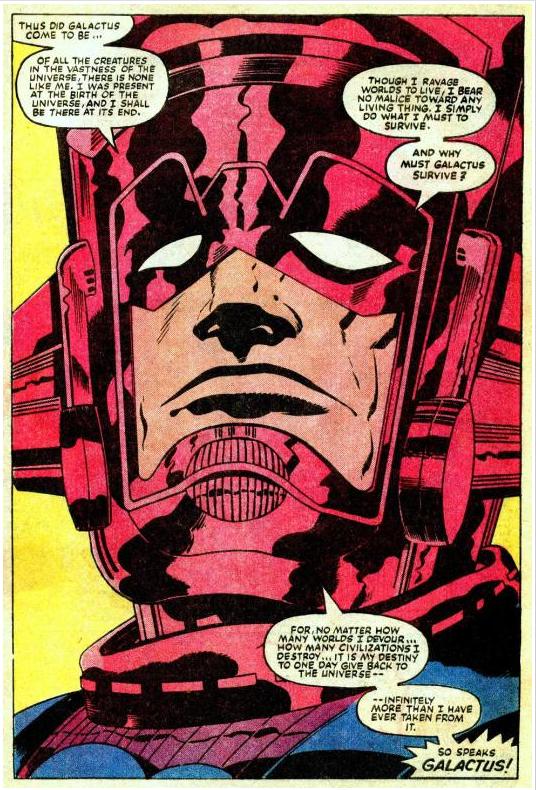 It may not have been an intentional reference to to the comic you mentioned, but Galactus did help defeat the universe-endangering being known as Abraxas.

Abraxas... spontaneously assumed the embodiment of destruction that was the counterpart to the very act of creation embodied by the being known as Eternity.... He soon began to cut a swath of terror through various alternate realities... Abraxas taunted the Fantastic Four with the inevitability of his coming.

Galactus took the Nullifer from Abraxas, giving it to Mister Fantastic who used the weapon, destroying himself and Abraxas.

Galactus serves several vital cosmic functions. He is the last survivor of the universe which existed prior to the established and familiar Marvel universe, as the mortal Galan of Taa. Galan was present at the end of the previous universe with that universe's Galactus analog, who created a Big Bang which began the current universe. Being at the center of the Big Bang, Galan absorbed the Power Cosmic from the dying/exploding previous Devourer of Worlds and became Galactus. The existing Marvel universe, much like the previous one, is expanding but finite and will eventually reach an impassable barrier and begin to shrink back in on itself in a Big Crunch that will destroy all time and space. Galactus's purpose in that regard is to release the Power Cosmic he contains and create another Big Bang which will start up another new, fresh universe, and create another Galactus to serve the same function in it (probably Franklin Richards). Additionally, because Galactus is technically from an entirely different universe/multiverse system he is not subject to the same Eternity/Death/Infinity/Oblivion cycle as natives of this universe, so his devouring of planets to fuel his great hunger is outside their control. Without Galactus, the cosmic abstract forces would fall into balance and the universe would simply grind to a halt.