What happened to Geordi's visor?

Geordi had a visor throughout the Star Trek TNG television series but that vanished for the movies. What happened? Ideally I'm looking for an in-universe explanation (and out-of-universe, if it exists).

As I'm sure you already know, Geordi's VISOR was a partial cure for his blindness - it stands for "Visual Instrument and Sensory Organ Replacement". According to Memory Alpha:

The VISOR detected electromagnetic signals across the entire EM spectrum between 1 Hz and 100,000 THz and transmitted those signals to the brain through neural implants in the temples of the individual via delta-compressed wavelengths. (TNG: "The Masterpiece Society") The result was a vastly different visual acuity, with VISOR-wearers able to see in the infrared and ultraviolet ranges and beyond. To normal Human eyes, the images relayed through the VISOR could seem disorienting and unfamiliar. (TNG: "Heart of Glory", "The Enemy", "The Mind's Eye")

Geordi La Forge, born blind, was given a VISOR after his fifth birthday. (TNG: "Hero Worship") He later replaced it with ocular implants between 2371 and 2373. (Star Trek Generations; Star Trek: First Contact)

So, that's the difference between the movies and the series. Medical technology improved. I think it has also been said that the VISOR caused some pain as a side-effect, but I'm not sure that that comes out of canon.

It is canon (courtesy of Plutor): (Quote from Encounter at Farpoint)

CRUSHER: You've been blind all your life?
LAFORGE: I was born this way.
CRUSHER: And you've felt pain all the years that you've used this?
LAFORGE: They say it's because I use my natural sensors in different ways.
CRUSHER: Well, I see two choices. The first is painkillers.
LAFORGE: Which would affect how this works. No. Choice number two?
CRUSHER: Exploratory surgery. Desensitise the brain areas troubling you.
LAFORGE: Same difference. No, thank you, Doctor.

As to the out-of-universe explanation - LeVar Burton has been quoted as disliking the VISOR because it restricts his peripheral vision, and because the constant pressure on his forehead gave him a headache by the end of filming. Perhaps they decided to cut him some slack and use CGI in the movies.

Out of universe, Penny Juday (Senior Art Dept Coordinator for TNG and Trek Archivist for Paramount Studios) rescued the Season 1-2 prop from a warehouse at Paramount Studios. The prop doesn't appear to have been sold in any of the Trek Memorabila auctions which would strongly suggest that she still has it in her possession.

The "hero" visor for season 3 onward was sold at a private auction for $7000 in 2012. No record has emerged of who cast the winning bid, nor has the visor turned up in any public collection.

A third VISOR is in Levar Burton's possession. It appears to be the "older visor" used in the show TNG: Identity Crisis, as discussed here. 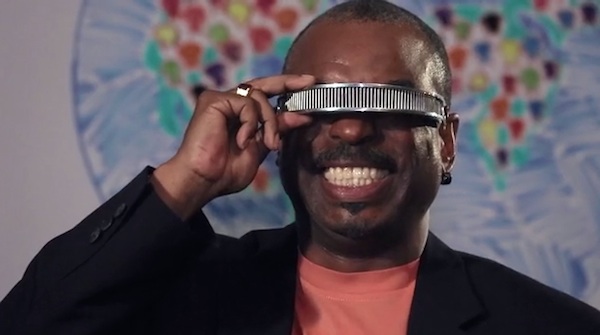 This was addressed in the film's official novelisation.

In the silence that followed his brief, blunt statement that the Borg had reappeared, expressions grew somber and five pairs of anxious eyes focused upon him. The fifth pair of eyes belonged to Geordi La Forge, who, like the Enterprise-E, seemed familiar yet changed. La Forge's VISOR had been replaced a short time before by electronic ocular implants, and Picard still felt mildly disconcerted every time he looked into his chief engineer's large eyes, with their dizzyingly intricate geometric designs traced in black upon starkly blue irises.

and in the film's original screenplay

Scene 17.
INT. MAIN ENGINEERING:
Where GEORDI and N.D. Engineers are rushing about, hard at work. Geordi is no longer wearing his VISOR -- he now has artificial ocular implants for eyes. They have a distinctive electronic look to them.

Note that, in-universe, he had been offered an upgrade to his VISOR (basically replacing it with cybernetic eyes) in an earlier episode of TNG. He seems to have been reluctant because of the loss of visual range.

Evidently he changed his mind at a later date, presumably because the technology has improved in the intervening decade.

PULASKI: It's possible to install optical devices which look like normal eyes, and would still give you about the same visual range as the visor.

LAFORGE: Done? You say almost. How much reduction?

LAFORGE: Well, this is a lot to think about. I'll get back to you, Doctor. Thank you.

TNG: Loud as a Whisper

20
Which VISOR does LeVar Burton own?

14
Why did no one notice Geordi's transmission?
21
What happened between Riker and Troi?
23
Why is Geordi the only guy with a visor?
13
Was there anything Geordi could have done to avoid the visor hacking?
6
Why does Geordi La Forge's VISOR see a wide subspace spectrum and not just visible light?
13
How does Geordi LaForge's visor work?
20
Which VISOR does LeVar Burton own?
4
Does Geordi have more than one VISOR?
34
Do we ever see what Geordi La Forge sees?