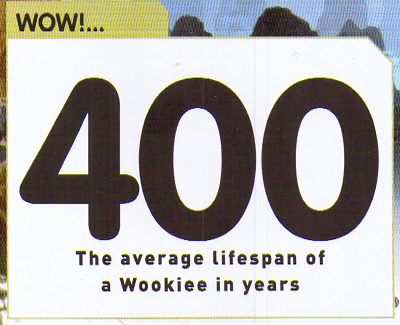 1
How long do Wookiees live?
123
Was any character alive during all of the Star Wars episodes from I to VII?
26
How old is Chewbacca?
17
Are the humans in the Star Wars Galaxy really humans?

8
What is Wookiee fur really made of?
1
What is the source of this Wookiee mp4?
5
Wookiee with a "web" belt?
5
Is Shyriiwook still the name of the Wookiee language in Disney canon?
27
Has Han met a Wookiee aside from Chewbacca?
32
How does Rey know the Wookiee language?
8
Are Wookiee Life Debts officially non-canon for Star Wars 'nouveau'?
15
Have we ever seen a shaved or a bald Wookiee?
14
Does this website provide consistent translation into Wookiee?
16
Does a Wookiee Life Debt Ever End?