Why does the Green Lantern have to say the oath when charging his ring?

The Oath of the Green Lantern is spoken when charging his ring:

In brightest day, in blackest night,
No evil shall escape my sight.
Let those who worship evil's might,
Beware my power...
Green Lantern's Light! source 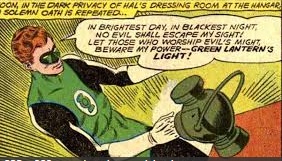 If this question is deemed a duplicate, I'll remove this.

According to the DC Wikia (emphasis mine):

All power rings need periodic recharging. The process is not instantaneous so many Green Lanterns recite an oath while the ring charges. The oath is not required to charge the ring, but is recited to reaffirm the person's commitment to the Green Lantern Corps, and to measure the time it takes the ring to charge. While many Green Lanterns create their own oath, the majority use the Corps' official oath as a sign of respect.

The Green Lantern does not have to, except as a convention. There's nothing special about the words except for personal/Corps significance, as oaths differ between certain Lanterns. And in a previous continuity where the Guardians had left the universe for various reasons, the Corps had collapsed and mostly only Jordan, Gardner and Stewart had rings, Jordan recharged his ring while counting; the oath had lost significance for him (The Road Back).

11
Why do some Green Lanterns talk to their rings when giving a command?