Why the fake desert landscape in Return of the Jedi?

At the end of the battle against Jabba and his henchmen, which was set in (what appears to be) a real desert, the two droids are lifted out of the sand, feet first, against a very fake looking backdrop.

Given the attention to detail throughout the original trilogy, this seems to have been a strange decision.

Was it due to time constraints, budget or something else? I'm curious to know if there is an on-set 'story' behind this scene. 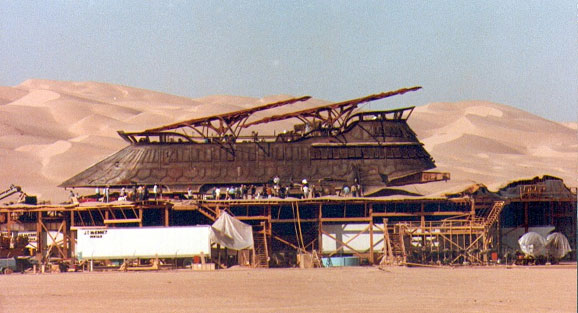 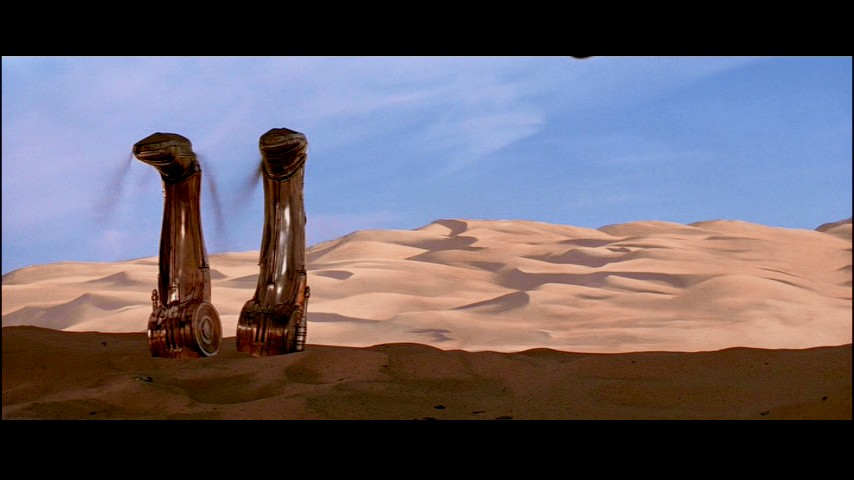 After adding pictures: on every viewing of ROTJ, the backdrop appears "unreal", but after adding the above picture, it might be more that the sand in the foreground is oddly lit? At any rate - it looks bizarre, as if they forgot to film it whilst on location.

As you said in your question, due to time constraints and budget a vast majority of the backdrops were hand painted with matte paint. There is an article here, where you can see a lot of the amazing paintings.

It's not just the paintings that really show how ahead of it's time Star Wars was in the late 70s. The camera work and perspective needed to use these backdrops and create realistic cinematography is ridiculous. So Star Wars isn't just one of the most popular film series of all time, it was also at the time at least, a pioneering film in it's creation techniques.

It's interesting to note what the camera does to these paintings. Even though they are realistic enough for us to look at, they aren't ultra-realistic like some paintings you see today. The techniques used seemed to enhance the imagery of the paintings. The artists had to make color adjustments to account for this in some cases. Not an easy task at all.

Not the answer you're looking for? Browse other questions tagged star-wars droids return-of-the-jedi jabba-the-hutt or ask your own question.