In A New Hope, the Death Star is only referred to as such (in dialogue) on four separate occasions; three of which are the intercom at the rebel base on Yavin 4, so I'm not sure they count as truly separate. It does appear in writing in the opening crawl and, likewise, in The Empire Strikes Back (where it is obviously not verbally mentioned at all). In Return of the Jedi, it appears again in the crawl and in dialogue -- to my count -- five times (more, but not by much given the plot). I haven't had a look through the scripts of the prequels; however, I would assume it's hardly mentioned, as it's still in the planning phase.

According to the new (Disney Canon) junior novel, Star Wars: The Princess, the Scoundrel and the Farm Boy, the Station was codenamed the Death Star;

Palpatine himself refers to it as a "battle station":

The Emperor: [In the throne room, Luke is watching the Imperial fleet attack the Rebels from the huge throne room window] As you can see, my young apprentice, your friends have failed. Now witness the firepower of this fully ARMED and OPERATIONAL battle station!

General Tagge: What of the Rebellion? If the Rebels have obtained a complete technical reading of this station, it is possible, however unlikely, they might find a weakness and exploit it.

Would this thing even need a number? 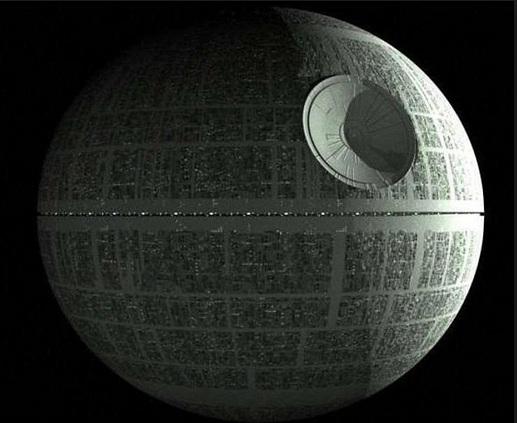 I'm tending to dismiss Wikia on this one, they are using the Star Wars Roleplaying Game Saga Edition and I'm not convinced that's canon.

Yes; in the radio dramatization of A New Hope we hear a conversation between Leia and Captain Antilles (not Wedge Antilles who later flew the Death Star mission with Luke, but rather the Captain of the Tantive IV) where she asks him:

"Have you ever heard of an Imperial base code-named 'Death Star'?"

She then lets it slip accidentally in front of a high ranking Imperial Official. He says and I quote:

"Death Star!? Where did you hear that, that is a classified ongoing Imperial project."

So to answer your question yes "Death Star" is an Official Designation.

A stormtrooper in A New Hope, when searching the Tantive IV, says to Darth Vader:

This may indicate that the name is official or may have been a slip on that trooper's part.

In Rogue One and in the book Thrawn: Treason by Timothy Zahn, both of which are Disney Canon, have numerous references to the Death Star, but it is mostly referred to as "Project Stardust," named after Galen Erso's nickname for Jyn Erso. The Death Star was the more common name for the battle station, as it was used by everyone except for Director Krennic himself and Assistant Director Ronan.

Granted, you may be asking for Original Trilogy answers, but based on all of Disney's Canon, I would say the designated name was Stardust, which was mainly used to prevent people from realizing it was a superweapon that could provide death to the largest planet.

112
How is canonicity of derivative works determined for Star Wars?
6
Is there any explanation provided by the franchise behind the name Death Star?

76
How did the Death Star move?
63
The use of 'Darth' as Vader's name, not title, in Star Wars
6
What is the largest number of Star Destroyers shown on screen at the same time?
3
Were medals awarded after the destruction of the second Death Star?
8
Exactly how significant was the Rebel Base on Yavin IV?
24
How much of the Death Star did the stolen plan cover?
71
Was Luke in “Return of the Jedi” really “better” than Obi Wan in “Revenge of the Sith?”
4
What Star Wars footage shot for one film was reused in a later film?