I was reading this question and was strongly reminded of a series I remember reading in my teens. This would have been a series of novels (possibly just one), published in English, and likely before 1980 - I read it in the 90s and it was fairly old, a used book. I do not think it is the same as the linked question, which is why I'm asking this separately. It was definitely a fantasy, not sci-fi.

At least two girls (and possibly also some boys/other girls) are transported from modern Earth into a fantasy world. I think they're a group of friends, possibly with some romantic pairings, and are in the 16-25 age range. The first significant scene I remember is two of the girls ending up in a city, where they are taken in by an older female artist (might have been a different creative type, like a sculptor/actress). She's lesbian/bisexual. At some point she attempts to give one of the girls a love potion, but they reverse it on her, so instead the artist falls in love with the girl and accompanies her for the rest of the books.

Twist: It's later revealed that the artist's friends recognized the love potion and removed it. She pretended to be in love and went along because she thought it would be interesting.

At some point at least one of the girls ends up basically being a magical sex slave/prostitute. I remember her being tattooed or painted - I think in blue - and also possibly given some magical jewellery/piercings that ensure her obedience/love of her owner.

I do not remember much of the over-arching plot, just a few disjointed pieces:

The world has chaos/wild magic storms. The books might have called them something else. Anyone or anything caught by these storms is transformed into something else entirely, so different objects or species. These show up throughout as minor plot encounters. I think they can be defended against with a special material. Near the very end, a large storm engulfs a major city, giving it entirely new architecture and transforming the inhabitants into green, hermaphrodites with a centaurish body structure.

I am not 100% sure this was the same novel, but I recall a secondary character with a secret - at night he turns into a woman (not just his body, but an entirely different person). At some point it's revealed that the woman was his lover, and he saved her life by sharing his body with her - of course, now they can never meet/touch again.

Your recollection of it is actually pretty good; the girls (Charley and Sam) are transported to Akahlar, which is sort of a hub between various worlds. The 'changewinds' are the feared wild-magic that can pretty much change anything into anything else, although it seems to backfill the natures, such that the new products were possibilities that were just never realized. (A common theme in Chalker's works, as is the modification of identity/mind/ gender and so forth. See the 'Well of Souls' series for the UR example).

The tattoo artist with the love potion is pretty much as you remember, but she keeps with them because she realizes she was stagnating in her career before the confused thing. She does the conversion on Charley, as I recall, giving her a super-sex-toy body, an all-over butterfly styled tattoo, but things stop just short of her getting the last potion that will lock in the sex-slave mindset.

I forget the stringer's name, but the Man/Woman who changes at night is also a part;

happily, they get a happy ending in the final book. 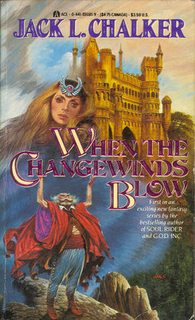 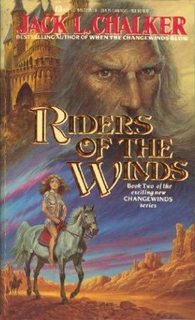 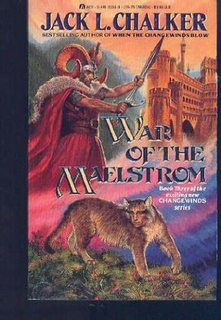 8
Young Adult novel about a parallel fantasy world accessible at certain phases of the moon
8
Trying to remember a contemporary fantasy novel involving white and black magic lodges
11
Help Identifying fantasy novel about magic red jewel
10
90's/00's anime about 3 girls who travel between the real world and a fantasy world
23
Fantasy series where magic smells faintly of sweet almonds
4
Novel about a girl who was transported to a parallel world, where she attended a magic academy