Series of books; in one there is an island with very tall large pillars

I forgot the name of these books, but they are for kids, and perhaps 200 pages apiece.

There is some magical element to them, but I forgot what exactly it was. I seem to remember conscience animals at one point, but all the characters are human.

I distinctly remember in one of the last books, there is an island with several large pillars of earth on it, and at least one or two of them are so high that they stretch into the clouds and are impossible to see or climb. Another is covered in grass at the top. The others have bridges across them, and the island is populated by people. The main characters come in a boat with knowledge of some big sea monster, and at the end of the book, the monster knocks over one of the tall pillars, and it does a domino effect. The final and tallest pillar crashes down on the monster and it is found to have spikes on it, like that was it's intended purpose.

I seem to remember the sea creature was released by a pair of boys accidentally from an underground lake in an earlier book. They were adults on the ship at the time that the group reaches the island.

I also distinctly remember a game of chess between a girl and a prison guard (or a prisoner maybe?) that the book showed move-by-move in an earlier book. In the same book, I remember some kind of underground tunnel used to escape from the city's walls where the girl lives.

Anyone know what series this is?

I found it! The name of the series is "The Land of Elyon." Thanks to Wikipedia's complete list of fantasy novel series! 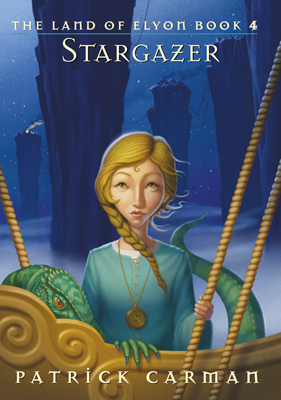 6
YA book with smiling girl on the cover with very long braid and an animal
7
Novel: little girl holding a green stone that gave her the ability to talk to animals
4
Recall book series with a young girl who can talk to animals (English with at least 4 books)

17
Pre-80s movie with an alien monster who looks like a rock
9
Sci-fi book about this girl with purple hair and some others travelling into space
4
Movie about an amulet and book of magic?
4
YA Book about two children who are turned into a manta/sting ray and a large bird
6
Book in "Where's Waldo" style with 2 kids, 3 book-ish character and characters from other stories
7
YA book series: 4 books each follow a child with a type of elemental magic, who are brought together in the 5th book
3
Series about 3 kids underground who used white tiles